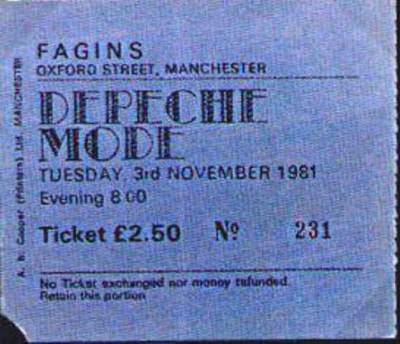 On November 3rd 1981 Depeche Mode played for the 2nd time in their history in Manchester at Fagins Nightclub on Oxford Street .

This is the only existing Ticket stub known to exist or at least online anyway .

The Ticket is owned by Daryl Bamonte who is a close freind of the band and still is to this present day and the image also appeared on the Album sleeve of Depeche Modes Album "The Single 81-85" .

On the same day Depeche Mode also did a Photoshoot with Tom Sheehan Manchester Photographer at the rear of the old Grosvenor Picture Palace Oxford Road which is now "The Footage Pub" fomerly "Flea & Firkin" .

The concert can be streamed and downloaded via this link aswell www.depechemode-l...
Artefact added : 25th November 2015
by Mancmoder101

Marty Says –
It's a long time ago now but I purchased a ticket from Picadilly radio to see Depeche Mode at Fagins. There was a handful of people there and I am sure this would have been a very early gig, if not the first to promote their record release. The date on the ticket looks like 1/8/81 so is before the ticket pictured in this thread. Not sure how I can upload a scan of my ticket? 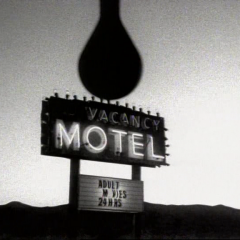 Mancmoder101 Says –
Hello mate , its Andy from that Facebook Group linked above , your ticket was 5/8/1981 , first time DM played in Manchester , they then played again at Fagins on November 3rd 1981 , more info via the Facebook group.

Ian Stapleton Says –
I saw Depeche Mode at Rafters supported by The Delmontes.
Is this the stub from the same gig ?

Mancmoder101 Says –
No , the Rafters gig was August 5th 1981 supported by Ludus , so was there another support band ? This is the gig reviewed by Morissey that caused a stir , i have ticket scans and posters from this gig .

Ian Stapleton Says –
They played Rafters twice.
I was at the other gig featuring The Delmontes....
If you'd like to leave a comment, please Login. Login
Manchester Digital Music Archive is licensed under an
Attribution-NonCommercial-ShareAlike 4.0 International License.
Charity no. 1164179
Our archive currently contains 3869 Bands, 758 DJs, 1460 Venues, 323 Industry Professionals and 29710 artefacts contributed by 4047 members.