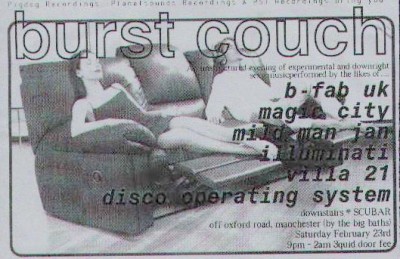 The sporadic Burst Couch nights get started with fine sets from all.

On the bill were:

transmission Says –
Other pix from the gig
www.camera1.free-...
If you'd like to leave a comment, please Login. Login
Manchester Digital Music Archive is licensed under an
Attribution-NonCommercial-ShareAlike 4.0 International License.
Charity no. 1164179
Our archive currently contains 3831 Bands, 752 DJs, 1454 Venues, 303 Industry Professionals and 29442 artefacts contributed by 3989 members.