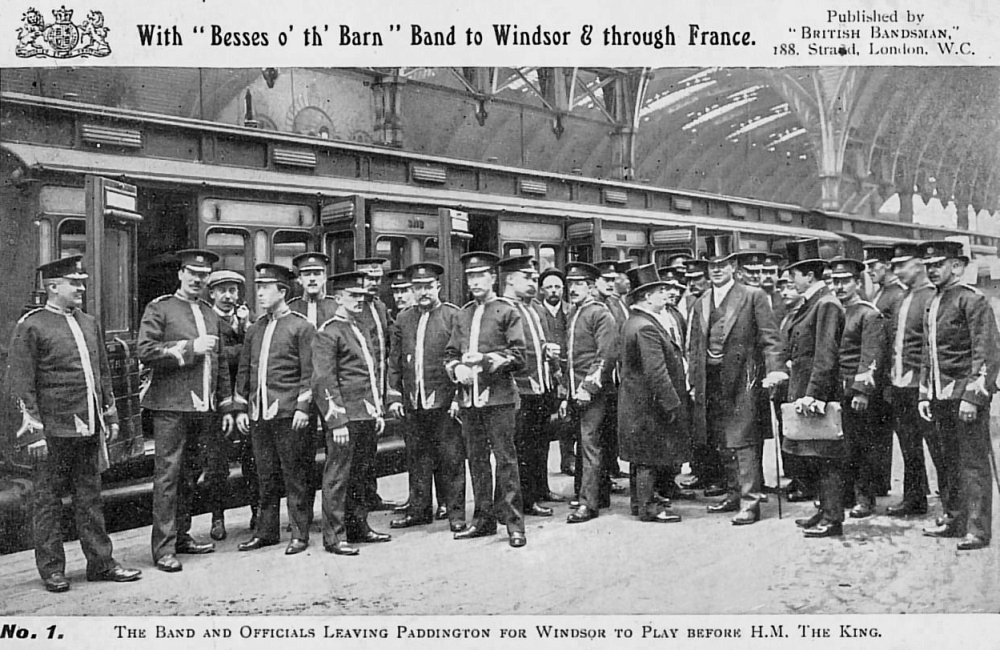 1905 was a pivotal year in the history of Besses o' th' Barn band. You need to place this year in context of what was happening in Europe with squabbles between the major countries looking to escalate, especially via the rivalry between the descendents of the Late Queen Victoria (Edward VII of UK, Wilhelm II of Germany, Nicholas II of Russia) as well as other leaders such as Émile Loubet, President of France. The British Monarch was trying to patch up all the differences via the “Entente Cordialle”, where he was aligning Britain with France and other Allies and hoping to avert what seemed to be an impending major conflict or war. His Prime Minister, Arthur Balfour called on Besses (by Royal Command), to champion the Entente Cordialle via a Tour of France. The Tour started with Besses playing a concert at Windsor for King Edward VII and his wife and the whole Royal Family. This included the Prince Regent (soon to become King George V), and his two grandsons who captained two Eton Cricket Teams prior to the Concert (later to become King Edward VIII (abdicated) and King George VI (father of current British Queen, Elizabeth II). Immediately after this major concert, Besses (now known as the Royal Besses o’ th’ Barn band), were despatched by train and ship to France where they delivered a Tour that included playing to the French President and all the major French dignitaries. The venues attended were the biggest in France, including the Trocadero in Paris and the Tuileries Gardens.