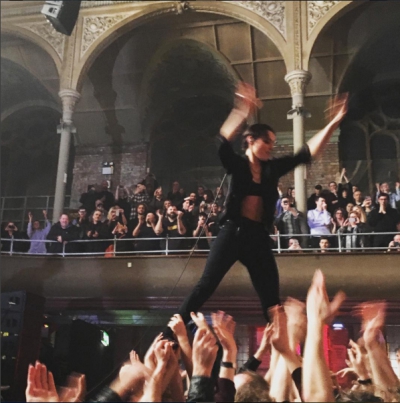 Savages were great at Albert Hall in February. This picture was taken by Martin L. Thomas

Sarah Walters wrote this review for the Manchester Evening News.
he captures it perfectly and is spot in about the drummer!

When kids dream of being in a band, the band they're dreaming about looks and sounds like Savages.

Four mates, thick as thieves, self-styled in all black and lit in all white: visions don't get much cooler than the sight of this all-girl four piece on stage, nor do band names put their finger quite so succinctly on the sound a group makes.

It's clear French frontwoman Jehnny Beth has taken lessons from the best. She looks as formidable as Patti Smith, she howls with the same breathless quiver as Siouxsie Sioux, and she can walk on top of a crowd as confidently as Iggy Pop.

But Beth is just one component in what is rapidly becoming a perfect whole.

Guitarist Gemma Thompson can turn on a pin head between dark episodes of overwhelming feedback and delicate accents of melody; Ayse Hassan fights basslines out of her four string like she's wrestling a tiger into submission; and then there's Fay Milton - probably one of the most exceptional and entertaining drummers to watch in modern music.

Two wild and worldly albums in - their 2013 debut Silence Yourself, and this year's more titularly upbeat follow up Adore Life - and Savages are now in possession of a coherent musical vision. Three years ago, there still seemed a lot of work to do; it felt that all the right references were in place, but that Savages were still searching for their own true voice.

It only takes opener and newie Sad Person to confirm they've unearthed it, the driving heavy metal beat perfectly exaggerated into a swampy distortion by the old chapel's natural acoustics. Further evidence? Them get a load of the madly crashing middle-eight of its "slow and sexy" album buddy, Slowing Down The World.

It's all so physical, from Beth's bucking bronco style dance moves to She Will's wild high hat smashes. In fact, it's a physicality that causes them to call a halt to huge hit Husbands in order to save a person injured in the front row.

"One down, all down," offers Beth as she returns to have mic after a prolonged pause to sort out the situation. "You all look after each other."

The prize for most epic response goes to second album opener The Answer, though, and it's only really rivalled by request Hit Me - the track on which Beth will prove her crowd surfing credentials. No Face yields to the relentless chant of T.I.W.Y.G and, as posts of white light flicker like a wall of old cinema projectors, Beth leans on her mic stand as a woman spent.

She can't be, not before they've had time to get through their expletive signature set closer F******, anyway.

But there will be no encore; there's no need, what's left to prove?
Artefact added : 24th March 2016
by Abigail