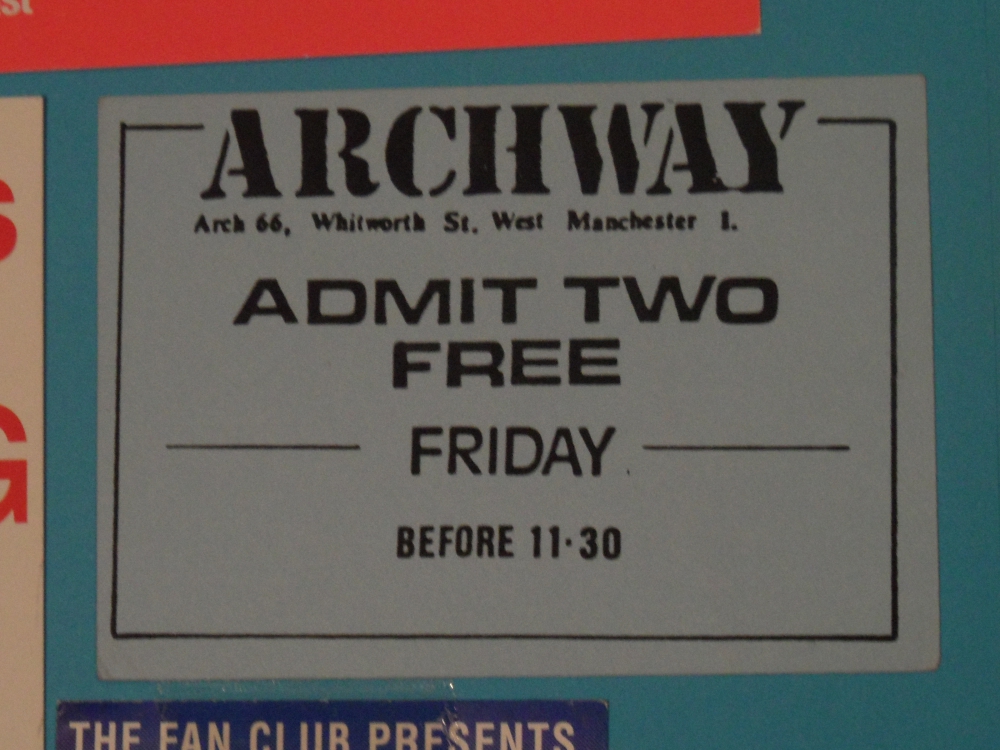 Archway was a Gay club housed in one of the arches under the railway line on Whitworth street. The look of the club was what we would now call 'Industrial'...Exposed brick, dark and with a high arched ceiling clad with metal sheets.
At this time Manchester had a big Punk/Goth scene. Weekly nights at clubs such as Cloud 9, Legend, Playpen/ 42nd Street, The Ritz Ballroom, Berlin/Asylum were mixed (Gay & Straight). Sexuality wasn't an issue in those places, being 'different' was the norm. Archway attracted some of that 'Alternative' crowd too.
The added buzz of the night was that the whole club would shake every time a train passed overhead!.

Terry Mac Says –
Wow! The Archway...haven't seen that clubs name in a loooong time!
I saw an amazing gig by US band Big Black and UK support Head Of David at that great venue all the way back in 1986! I'd come down from Glasgow with a mate of mine to catch both bands with my trusty Sony Professional Walkman bootlegging machine in hand to record both bands, and managed to get a word with Big Black's Steve Albini, got him to introduce Head Of David's set on my tape!
Yeah, those were the days. I'm in the process of uploading all my bootlegs to YouTube so if anyone's interested in this gig, or was actually there, then head over to the terrypussypower channel any time after Dec 2016 and check it out!

Abigail Says –
Thanks Terry - sounds ace. Do you happen to have a bootleg of Big Black at the Boardwalk?
If you'd like to leave a comment, please Login. Login
Manchester Digital Music Archive is licensed under an
Attribution-NonCommercial-ShareAlike 4.0 International License.
Charity no. 1164179
Our archive currently contains 3870 Bands, 758 DJs, 1461 Venues, 323 Industry Professionals and 29722 artefacts contributed by 4048 members.