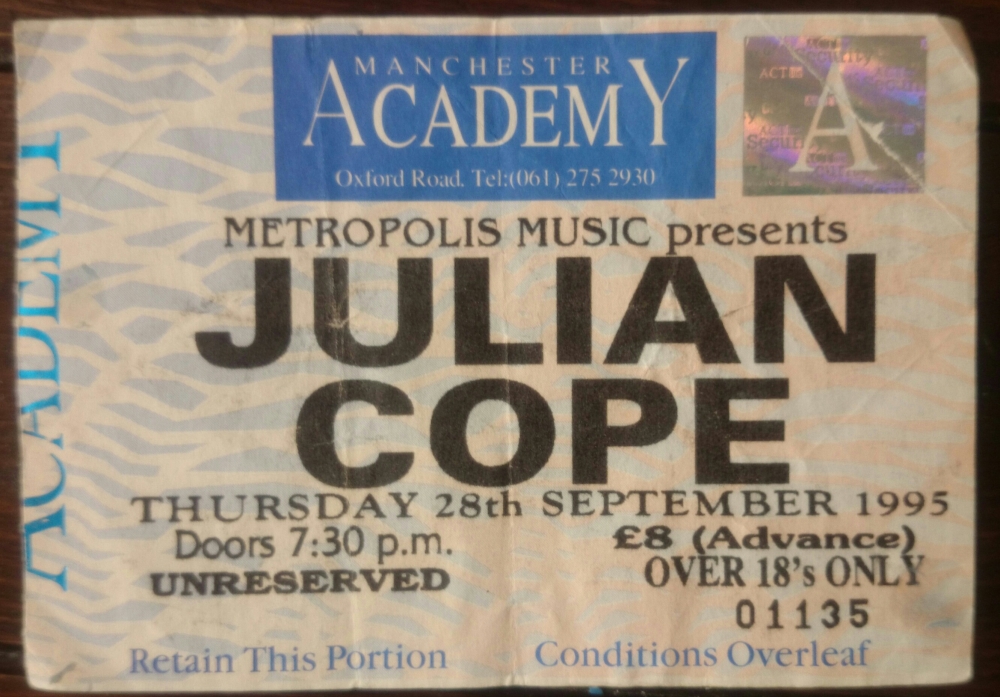 It was Julian Cope's '20 Mothers' tour. I came straight from a boring day at college in Preston with a friend. I can remember wearing a deep plum coloured dress, low cut and a little too long, dragging slightly in the dirt.

Julian had issued an urgent request (via a regular postcard sent out to those on the mailing list) for fans in attendance to wear hi-vis. I can’t remember what particular transcendental madness was behind this idea. I tried to borrow a jacket from my uncle who was a copper, but it didn't come off.

Also Julian advised that there was going to be no support, just a three-hour deeper-than-deep set...a thrusting undiluted neon continuum. I was worried I might find this a bit too much, but it was electric and the songs flew by too quickly.

Around halfway through the gig, something entirely unexpected happened. Julian, clad in some lurid lycra number, leaving little to the imagination (think Bowie in Labyrinth), launched himself off the stage and on to the front row, singling out a sixteen-year-old me for a passionate full on snog (with tongues).

The snog is one of my favourite claims to fame and rises up out of those grubby years like a diamond amongst coal. Closest I got to marrying a rock star.

I'm pretty sure there was a long, fatigued queue for chips and mayo from a take away somewhere up towards Longsight as a finale, after which we wound our way home back to Lancashire, giggling all the way.