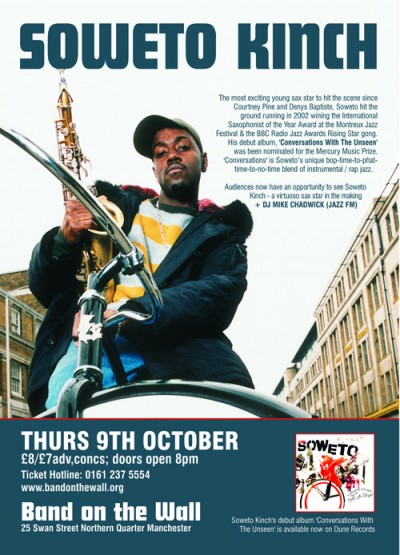 This gig won Jazz gig of the Year 2003 in City Life's 20th Anniversary Special Issue. The write up was as follows:

A man of two worlds, Soweto Kinch's excursions into rap seemed designed to reassure the mature jazz buff. Indeed "Planet Jazz", surely a hit single, is a witty affirmation of the his (sic) topsy-turvy worldview. Whereas the saxophonist's headlong virtuosity has the power to communicate to every generation, live the impact can be overwhelming - but strictly in the Bob Marley 'one-good-thing-about-music' sense. It's been a long time since jazz had this kind of turbulence and vitality.(MB)

Now I was there and this was one of the best gigs I've seen, Jazz or otherwise, at Band on the Wall or anywhere. It was one of those events that truly caught fire and the vibing between the artists on stage and the audience was magical.
Artefact added : 5th June 2007
by BandontheWall

mat Says –
Soweto (along with beatboxer Schlomo) recently did an MC-ing workshop with schoolkids at the Lowry for GMMAZ and the NW Pathfinder project- i think a video of it can be found on Youtube, i'll try and find the link.

mat Says –
my favourite gig at BOTW would have to be Terry Callier (roughly 2003?). An amazing performer and an amazing gig!
If you'd like to leave a comment, please Login. Login
Manchester Digital Music Archive is licensed under an
Attribution-NonCommercial-ShareAlike 4.0 International License.
Charity no. 1164179
Our archive currently contains 3660 Bands, 724 DJs, 1346 Venues, 234 Industry Professionals and 22139 artefacts contributed by 3611 members.