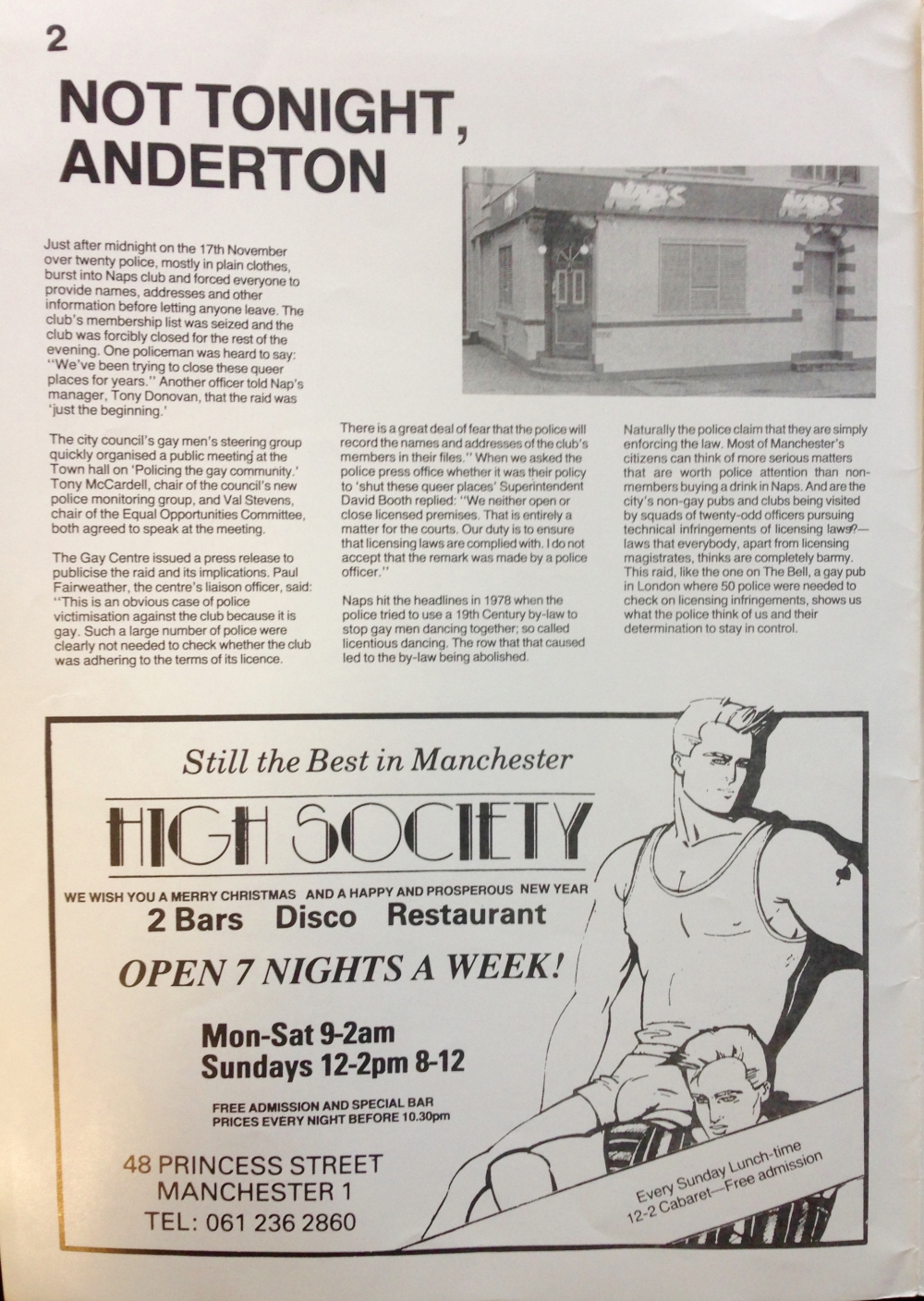 Text below is an excerpt from Manchester Pride forthcoming OUT! digital heritage platform, researched by Beth Ashton, Abigail Ward and Paul Wheatley:

On March 23 police officers entered Napoleon’s club - now dubbed the oldest gay club in Manchester - warning the manager that he was ‘permitting licentious dancing’. The local bylaw that is alleged to have been breached is one that dated back to 1882, which prohibited dancing deemed “licentious, indecent, profane, improper or suggestive and which is likely to cause a breach of the peace.”

In response, The Gay Activists Alliance called an emergency meeting and agreed to monitor police activity in clubs used by members, seeking advice about the definition of “licentious”.

Chief Constable James Anderton denied a ‘drive against gays’ after the CHE accused him of closing in on the gay scene ‘in pursuit of his crusade for moral purity’. In June, the Manchester Evening News reported that ‘shrieking homosexuals disrupted a massive Christian rally in Manchester to heckle Chief Constable Anderton’ at the Free Trade Hall.

Manchester Gay Information centre also received a £6,200 grant in this year after it was approved by Manchester City Council.

In response, Tory councillor Joyce Hill said she believed the money should go to something more worthwhile, adding: “This city is becoming a Sodom and Gomorrah. Cinema clubs show obscene films as early as 10:30 in the morning and dirty books can be easily obtained. Where will it all end?”

Coun Sally Shaw also responds and says an interviewing panel had been satisfied that the Gay Information Centre was run by sensible people who were not there to draw others ‘into their way of life’. The letters page of the Manchester Evening News publishes a response from a reader entitled, “Gays should find their own cash.”

Archives+ in Central Library, Manchester hold many copies of the Mancunian Gay, which is where I found this.

If you would like to use the collections please search the detailed catalogue at gmlives.org.uk and make an appointment to view material at:

If you cannot find what you are looking for please email: archiveslocalstudies@manchester.gov.uk