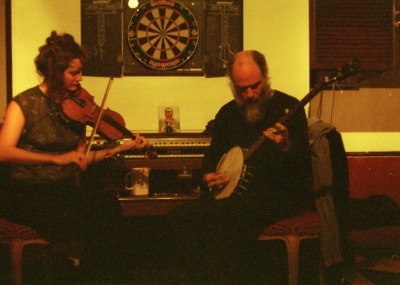 Daniel Higgs & Chiara Giovandro playing at the Briton's in 2007. Photo by Anthony.

Daniel Higgs is known to many as the frontman of Baltimore's LUNGFISH who released 11 LPs on Dischord Records between 1990 and 2005 (the only non-Washington DC-based band to do so). He has released solo and other collaborative recordings since 1998, often playing banjo and jews harp.

I seem to remember that this gig featured songs from his (then recent and more song-based) LPs Ancestral Songs and Metempsychotic Melodies, in arrangements for two voices with additional violin from Chiara. There is other video footage online from a set they played in the US of a similar date. The gig was packed; there was no local support act.

He played in Manchester twice in 2007, the previous gig being held at Platt Chapel on Wilmslow Road, Fallowfield (now derelict), while it was being used as an Arts and Club space between 2007 and 2012 (approx dates).
Artefact added : 20th June 2016
by storminateacup

OT Says –
Nice photo Storm...! Should Daniel and Chiara be added to our database of artists?

storminateacup Says –
Both non-local I'm afraid - I've added a little biographical info for Mr Higgs. I hope that a few things relating to visiting musicians is not surplus to the archive's requirements, especially when the gig was as memorable as this one - I have plenty of other bits and pieces mainly from 2002-2008 that DO have some local band involvement (which I'll create entries for) to upload in due course.
If you'd like to leave a comment, please Login. Login
Manchester Digital Music Archive is licensed under an
Attribution-NonCommercial-ShareAlike 4.0 International License.
Charity no. 1164179
Our archive currently contains 3870 Bands, 758 DJs, 1461 Venues, 323 Industry Professionals and 29722 artefacts contributed by 4048 members.