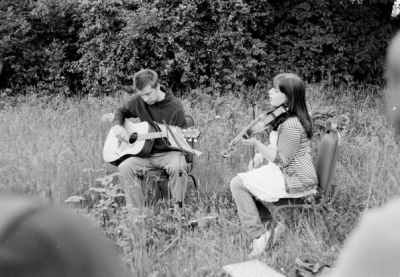 Kalbakken are/were the brother-sister duo of Dave and Kirsty Birchall, who drew their repertoire from Norwegian folk songs from their childhood.

This is one of a few gigs they played at (/outside) the Klondyke Snooker and Bowls Club in Levenshulme between 2006-2009. I think I've narrowed it down to this date based on the adjacent gig photos on my film and the obviously favourable weather. I am fairly sure this photo shows where they played the actual set, whereas the photo on the edge of the green is more likely to have been some kind of warm-up.

As you can see from the discography link on his website (evidence of Kalbakken CD about 4/5 way down) Dave is still very active in the Manchester improv and DIY music scene.
Artefact added : 21st June 2016
by storminateacup