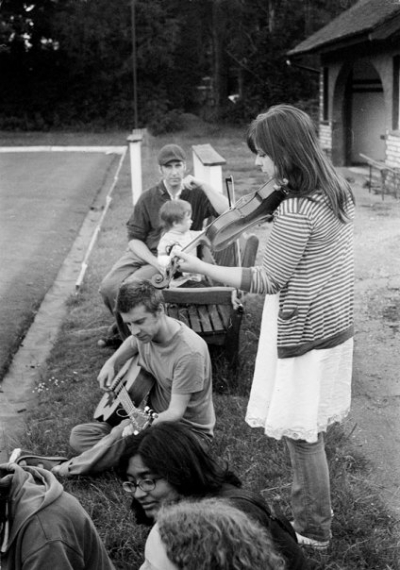 Kalbakken are/were the brother-sister duo of Dave and Kirsty Birchall, who drew their repertoire from Norwegian folk songs from their childhood.

This is one of a few gigs they played at (/outside) the Klondyke Snooker and Bowls Club in Levenshulme between 2006-2009. I think I've narrowed it down to this date based on the adjacent gig photos on my film and the obviously favourable weather. I believe they are warming up in this photo (although the distinction between this and the gig set may have been hazy.... I think 2nd half was indoors to avoid cars arriving between the musicians and the audience).

As you can see from the discography link on his website (evidence of Kalbakken CD about 4/5 way down) Dave is still very active in the Manchester improv and DIY music scene.
Artefact added : 21st June 2016
by storminateacup