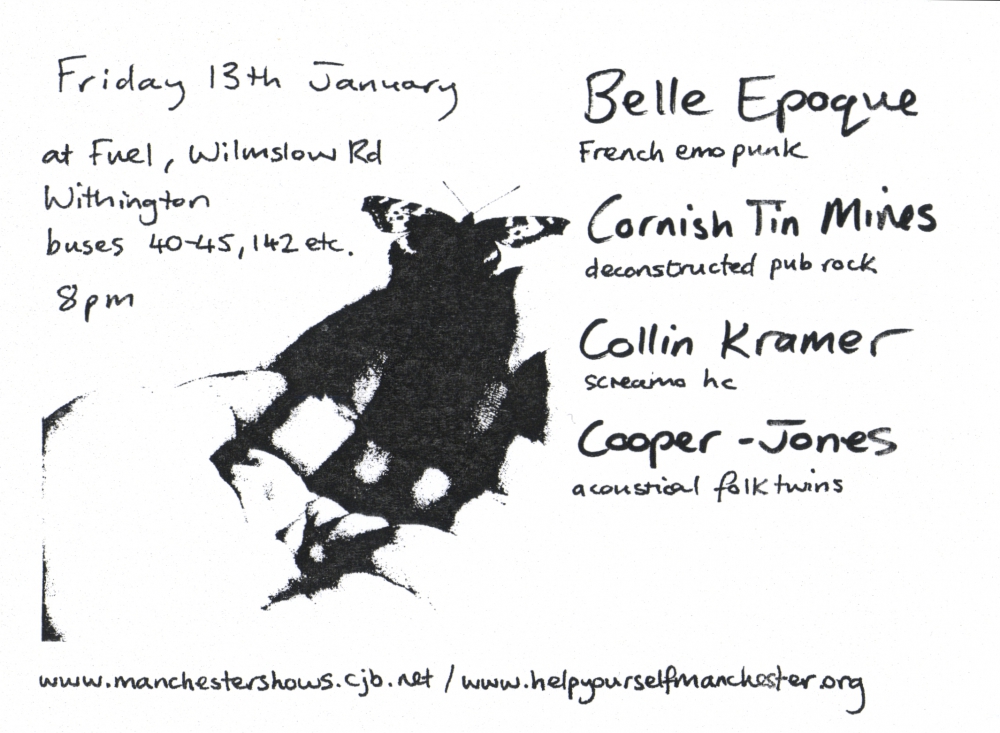 The second time BELLE EPOQUE came over we had a lot more trouble putting them on. This was pencilled in at Fuel, Withington at one point until it was decided they'd probably be a little full-on for that space...perhaps a good call, though I've seen plenty of ear-splitting stuff there since. I remember there was also some to-ing and fro-ing about whether this was really a "helpyourself" gig, and I think this is around the time it started to not be much of a collective any more. Anyway.... they were a great band in that French emo style and have a 12", a posthumous 7" and a much sought-after demo you can probably find all of online for free. They were on tour with COLIN KRAMER, who were a more metally screamo sort of outfit and you probably won't hear too much about.

I filed this under (non-Cornish) Manchester locals CORNISH TIN MINES, who were essentially 2/3 of Burnst (Ed and dbh) on their non-favoured (quite probably borrowed instruments) and Dave Birchall on bass. It was essentially just instrumental (post?-) rock, which when it came off proved quite fun. Dan uploaded a bunch of their demos for free, see link below.

COOPER-JONES also played to balance the line-up against the screamo hc, also regulars of the M19 scene at the time. Soph still plays music in London, Kelly and their sometimes-drummer Pas now play as Part Wild Horses Mane On Both Sides.

Flyer by Anthony, from an image made by my younger brother. Other flyer versions have hand-lettering by different people involved in the gig.
Artefact added : 4th July 2016
by storminateacup