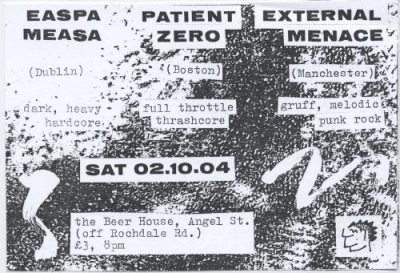 Flyer by Alex, who put on the gig. This is the earliest one I can find listed at this venue, which closed around 2006 and reopened later sucessfully as The Angel.

EXTERNAL MENACE formed in Scotland in the later 70s, but at this point their line-up was based in Manchester. PATIENT ZERO were product of the thriving thrash/hardcore punk scene at the time in Boston, Lincs. whilst EASPA MEASA from Dublin appear to still be going. Music linked below. They headlined, whilst the excellent SNOWBLOOD were also squeezed into the bill (I have written about them elsewhere).
Artefact added : 1st August 2016
by storminateacup