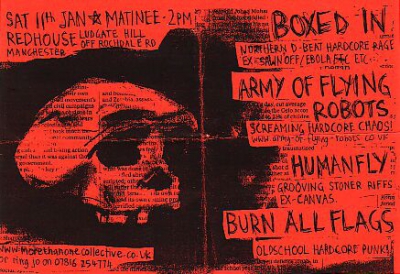 Flyer for one of the last gigs at The Redhouse rehearsal rooms. I also uploaded Jo's awesome poster for the same event.

BOXED IN - great hardcore punk from Bradford, ex-members of too many others for me to recall. That's the way to do it, just break up and keep writing new material. Boxed In got out 3 7"s and a 12" in a couple of years, all records I still treasure. A few years later a lot of them were in War All The Time....AOFR we had up regularly from Nottingham, their vocalist was in Manchester for a few years so saw them on plenty of occasions. Leeds band HUMANFLY have been going for ages now, ex-Canvas who are also well worth checking out for a more experimental heavy sound. BURN ALL FLAGS - there's a name you can click on to see half the hardcore gigs in Manchester from 2000-2005 or so. Their best recording was with Myke on vocals, I will link it on some of their other artefacts if it's not been done already. At this point all they had realeased was a 7" that played out of one speaker.

Music link : Humanfly - II (bandcamp) - this came out a bit later, but I'm linking it as I think they're offering it free for a short while. "A God Among Insects" was probably my favourite from their more frantic early sound.
Artefact added : 11th August 2016
by storminateacup