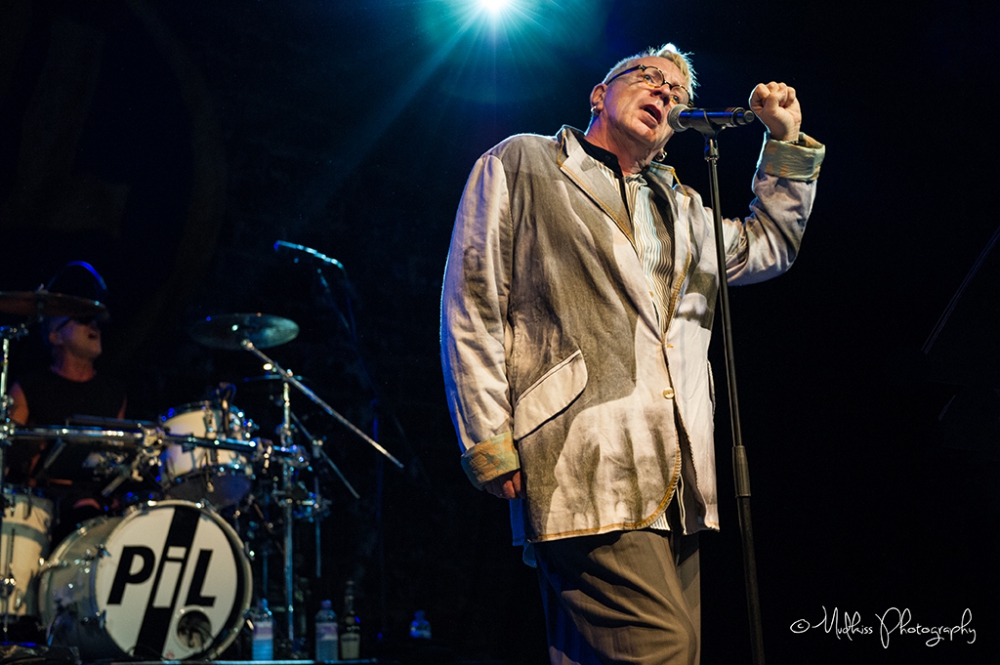 Public Image Ltd., and their somewhat notorious frontman John Lydon, are never too far away from hyperbole. Which is ironic, as Lydon is probably one of rock’s only protagonists who would loathe such language and sentiment. And that alone is always amusing.
But amusement aside, it’s hard not think in such terms when confronted by PiL’s live show.

So what exactly is it they do live? In simple terms they hit hard, and they hit low. This isn’t lavish, or beautiful, and it isn’t about recreating the moment. Instead it seems more about celebrating the moment. These songs feel vibrant and relevant, whether recorded 30 years ago or yesterday.

Tracks from their most recent record mingle appropriately with more recognised classics, and it’s no short change. But as assured as new tracks like ‘Double Trouble‘ or ‘The One‘ may be, their impact does not, and may never, resonate quite as much as the moments that everyone present is there to see. To watch Lydon and PiL in full flow during classics such as ‘This Is Not a Love Song‘, ‘Rise‘ and ‘Public Image‘ is to witness when the hyperbole spills forth.

The fire that burned in these songs is still present. ‘Public Image’ is almost the pinnacle of punk, what the Sex Pistols never achieved (but should have). Still today it feels vital, harsh and brilliant. ‘This Is Not a Love Song’ is as unhinged and obtuse live as it was when it was released, ‘Rise’ as jubilant a way to finish a show as any band could ever hope for.

This is a wonderfully exciting constant; ‘Poptones‘, ‘Warrior‘ and ‘Disappointed‘ all amaze, and all bring with them the intensity and excitement that becomes the staple setting for the evening. PiL may not be as young or as central to music as they once were, but that never affects the power of what they deliver. And deliver they do, time and time again.

PiL are originators, unwavering they have stood their ground even after all these years; they know what they do isn’t for everyone, and they quite simply don’t care. It’s this attitude which makes them so exciting live. What they do isn’t about driving sales, or pleasing crowds, it’s about the music and it always has been.

And it’s this commitment to the music itself that defines the performance. It’s all commitment and attitude and that is a truly brilliant combination when achieved with the kind of style and tunes that PiL have on all the pretenders. Here, standing before a very excited Manchester crowd, are the originators, still bringing the thunder.