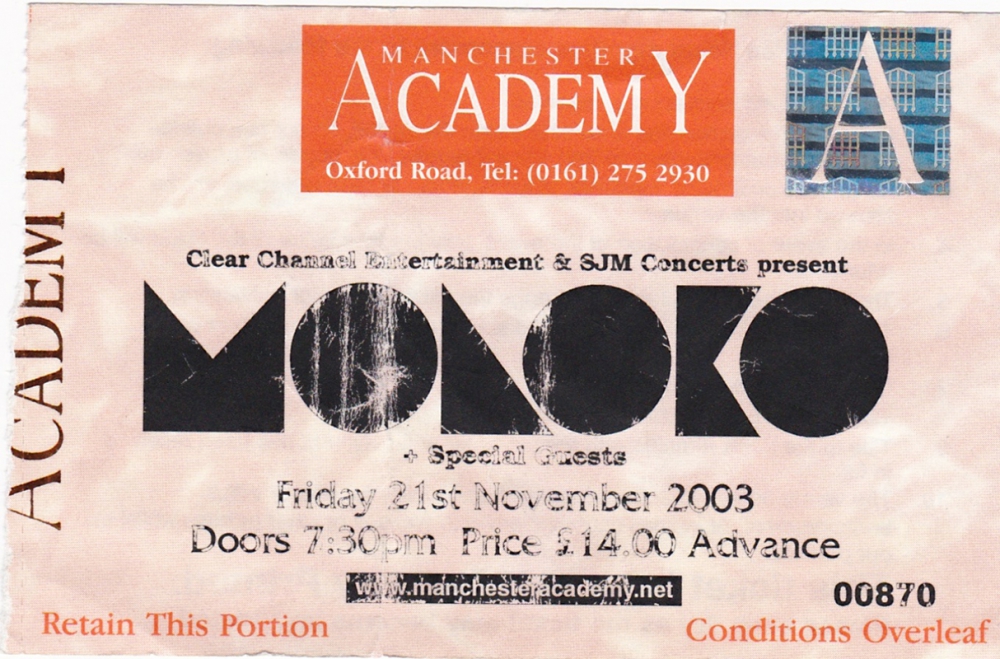 I first bought tickets to see Moloko in 1995. The gig was at Sankey’s Soap - a place I’d never heard of in Manchester. I couldn’t make it at the last minute and a bit of a teenage tantrum ensued.

I had been intrigued by the band’s debut - Do You Like My Tight Sweater? - but I didn’t know much about the band, and certainly had no idea what an exceptional pop star Roisin Murphy would become. (For that’s what Roisin is - a rare, possibly dying, species: a real pop star! Thrilling, bawdy, mysterious, outrageously glamorous, risk-taking, electrifying to be in the same room as.)

Fast forward five years, I’ve moved to Manchester, and I’m excited about going to a secret New Year party for those in the know. Organised by the Electric Chair crew, it is to be held on January 1st Y2K (remember that?) in a loft space adjacent to Sankeys Soap. The same loft that an infamous party scene from Queer as Folk was filmed in. Moloko are due to perform a set!

I arrived at the party, saucer-eyed and dying to let rip, only to be informed that the band had got so fucked on drugs the night before they couldn’t cope with playing. Another near miss.

So it comes to pass, that my first and last experience of seeing this exotic and most envelope-pushing of acts was on Friday 21 November 2003 at Academy 1. A lush night out on my own.

Let this be known: Roisin Murphy knows how to make an entrance.

Moloko begin with a little foreplay, teasing the crowd for a few minutes with a tension-building intro – all galloping hi-hats, Fender Rhodes and portentous strings – and just when we can’t take it any more La Murphy arrives to deliver the opening lines of ‘Familiar Feeling’, haughty yet mischievous in a fetish cap, welder’s goggles and fur stole. It’s all a bit too much for me.

But, fuck that band can play. As the hits flow the atmosphere grows wilder. Each song has been re-arranged for maximum dynamism and drama. And no one moves like Roisin. She gives herself unselfconsciously to the moment – one minute prowling panther-like around the stage, spike heels caught in the cables, the next attempting some sort of can-can whilst wanking off a microhone stand.

When the band takes flight I am reminded of the first time I saw footage of Roxy Music on the Old Grey Whistle Test: such ambition, glamour and humour. Feather boas draped over modular synths. Pop heart, avant soul.

The high point of the gig is a towering version of ‘Forever More’ - a masterpiece on record, but absolutely blinding live. There is something about the way this song builds and its bass/brass interplay makes me think of the climax of Stevie Wonder’s ‘Another Star’. The keyboard player, whose name I’m not sure of, ends up jumping around on his synths playing runs with his feet. Murphy destroys and then eats a bouquet of roses while this happens.

As a seasoned gig goer it is quite rare for me to lose myself in the moment (too often I’m thinking about the mix, or when I’m next going to need a piss), but this for me is a moment of sheer abandon. Which may or may not have been due in some small part to minor concussion.

Why? Because approximately half way through the gig (during ‘Pure Pleasure Seeker’, I think), Roisin embarked upon an epic crowd surf. She flung herself into the swarming multitude very near me. Seconds later I was reeling from being kicked hard in the face. My first reaction was shock, my second fury, and then, as I dabbed blood from my nose, the smugness arrived. She picked me! Roisin Murphy picked me to kick in the face with her PVC fetish boot! Be still my heating heart, etc. It was hilarious. What a woman.

I think everything you need to know about Roisin is contained within magnificent sleeve for the Statues album, the poster from which is still a prized possession of mine.

Since Murphy broke with Mark Brydon and went solo I’ve seen her play three times (including once at Academy 2). Each gig has been dizzying, galvanising, transformative. She has a true wildness of spirit that I hope she shares with the world for years to come. Pop music needs her.