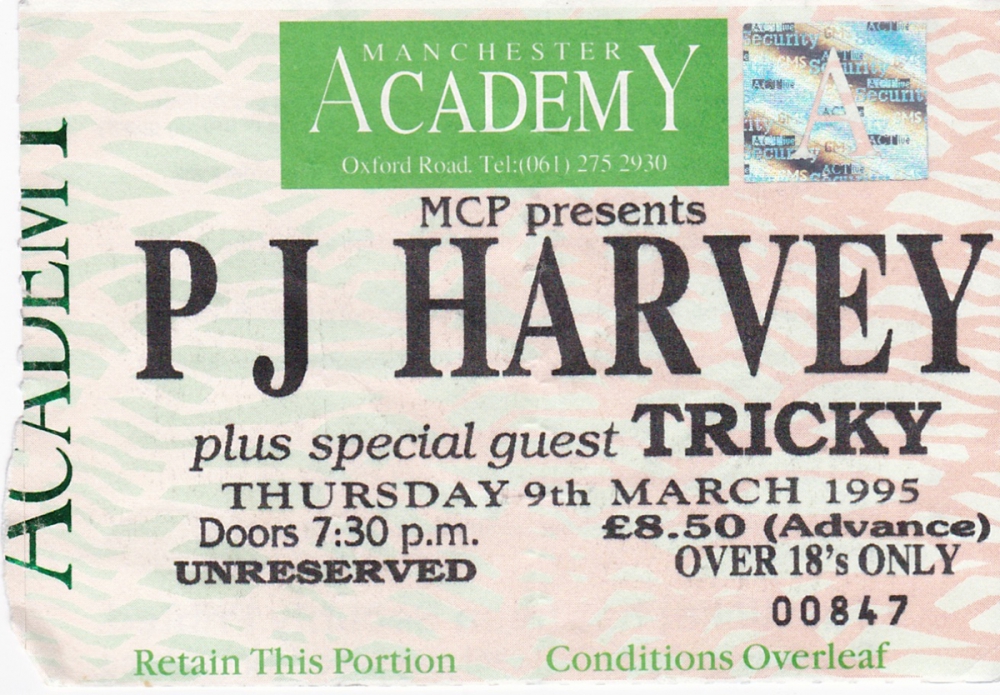 I scored a guestie for this gig (my first ever!) from the Island/Polydor rep at the record shop in Preston I worked in at this time. I really thought I'd arrived!

I was a huge PJ fan from 'Rid Of Me' onwards. I remember seeing a cut-out of her in the window of Action Records - the photo of her by Maria Mochnacz with her wet hair flailing. I just walked straight in and got the album. It was everything I needed at the time. She voiced my experiences. I raged; she raged. I bought 'Dry' the week after and loved it just as much.

The 1995 gig was her second at the Academy and she was promoting the wonderful 'To Bring You My Love' album, which I must have been spinning heavily on promo, because I was very intimate with it at the gig and it had only been out for ten days. I could really hear Nick Cave's influence, which pleased me.

Tricky was supporting, which I was excited about because 'Maxinquaye' was another huge record for me in early '95.

I was on my own at this gig, and still very young. It seems no coincidence to me that many of my most potent musical memories are of gigs I've attended alone. There was, as a result, an edge of wariness. It was a big crowd. Tension and expectation.

Tricky went by in a haze of smoke and shuddering bass.

Polly and the band opened with 'To Bring You My Love'. It felt so deliciously ominous. I thought I was going to explode waiting for the bass to kick in 'Yeah awlright!'.

During (I think) 'Working For The Man' and also later in the set during 'Down By The Water' PJ put her guitar down and weaved around the darkened stage holding a huge antique spotlight. This was the era of the famous pink catsuit, but I can't quite remember whether it got an outing or not.