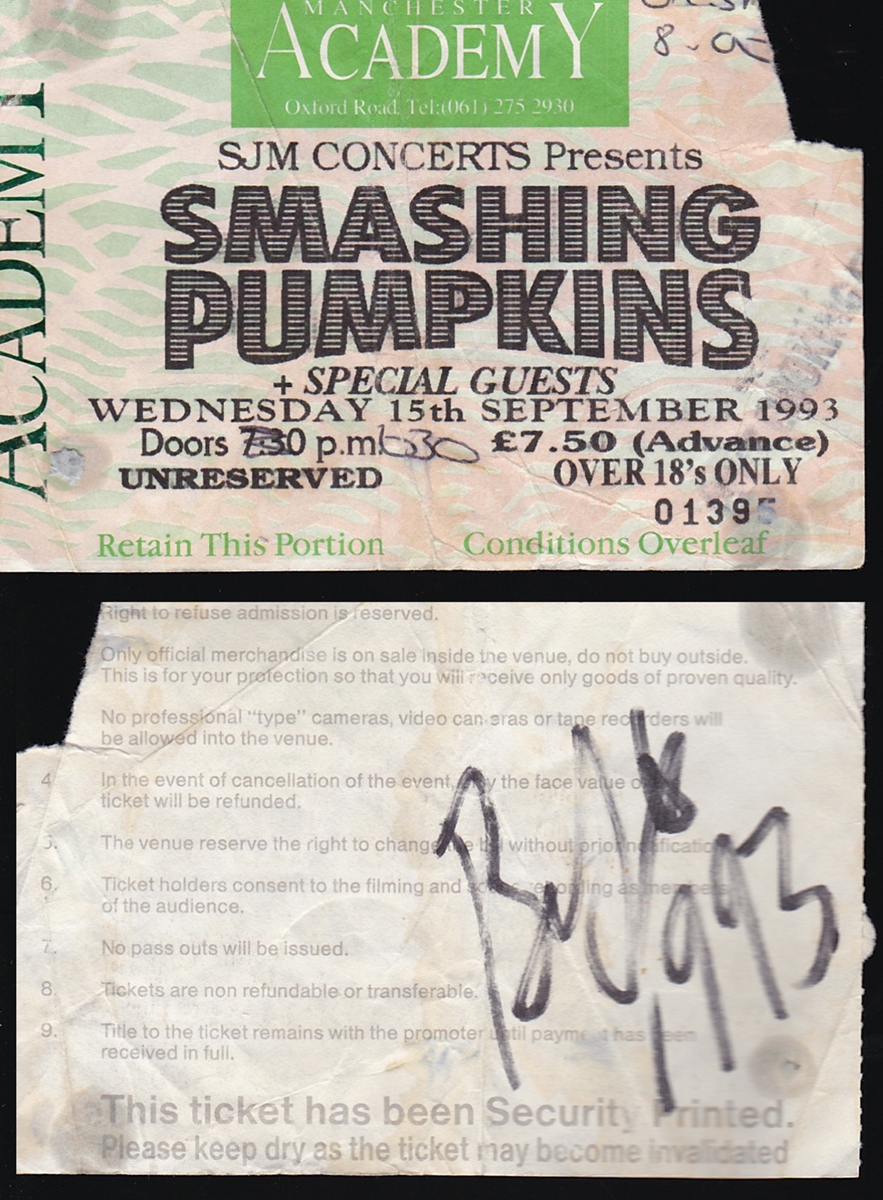 I think this may have been my first ever gig at the Academy. I went with my sister. I had a real thing about the Pumpkins' album 'Siamese Dream' but couldn't get into anything that followed.

I also liked that era of support act The Verve, but I can't quite remember anything about seeing them on this occasion. They were great a couple of months later at The Mill in Preston - it was 'Gravity Grave' and that shit. There was still a bit of mystique, pre-cat-in-a-bag and all that. I retain a weak spot for 'Sonnet', though, in spite of its terrible rhyming couplets.

Anyway! The Pumpkins were really intense. We got the breath squashed out of us. We were shitting it a bit, I think. The main thing for me was Jimmy Chamberlin. He was just an absolute monster on drums: fierce, complex, relentless.

After the gig we got talking to some lads outside the venue. They were having a conversation with Richard Ashcroft through a tiny window round the side of the building near where the coaches used to park. They were saying, 'Look, man, why are you supporting? You should be headlining!' We had a bit of back and forth with Richard and he ended up passing us a litre bottle of water through the window because we were so exhausted and thirsty!

As I recall, one of the lads then gave us his ticket (pictured), which has been signed by Billy Corgan. It felt like a magical night.

HowardM Says –
Hi Abigail. I was at that fantastic gig also. It was amazing. I think I was one of the guys you were talking to because I still have my signed ticket and it is the next number to yours (#1394). My friends and I bought them together. The gig recording is available on YouTube. m.youtube.com/wat...
If you'd like to leave a comment, please Login. Login
Manchester Digital Music Archive is licensed under an
Attribution-NonCommercial-ShareAlike 4.0 International License.
Charity no. 1164179
Our archive currently contains 3814 Bands, 743 DJs, 1437 Venues, 298 Industry Professionals and 28491 artefacts contributed by 3919 members.