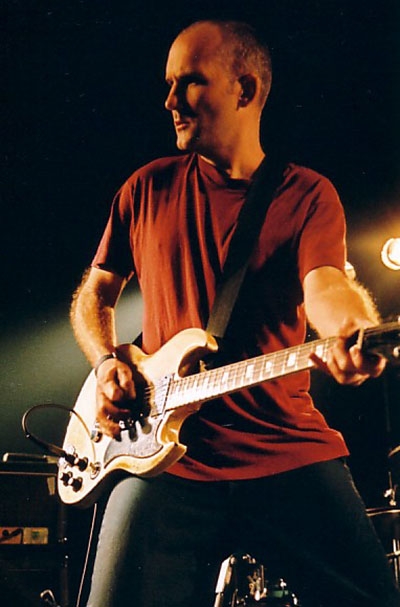 Fugazi's Ian MacKaye on stage at the Academy.

This review of the show by John Robb is taken from louderthanwar.com

There’s few sights in the world more heart warming, more invigorating, more life affirming than this fucking band in full flow. Its been far too long since the DC crew were last over here and yet their stock has been rising all the time. Without the need for any spurious fashion mag approved stamps of approval Fugazi have set their stall and they are not bloody budging.

Faced with their biggest ever crowd in Manchester Fugazi, more than fifteen years into their 'career’ are on object lesson in precision punk rock and powerful musical honesty. This is an exhilarating performance of sheer perfection, killer tightness and impassioned powerful rock music. Taking the sheer power of prime time hardcore and twisting it through all that post punk- post rock inventiveness that seems to have all but died out as an option in 2002- Fugazi play for nearly two hours. They play every single fucking song you can remember- a machine gun of awesome, askew, catchy as hell weird little riffs, utilising the space of the phat dub bass played in a punk rock style and vocals from Mackaye’s authoritative bark to Guy Picciottio’s anguished howl that hits you in the gut. And thats not forgetting how great those damn guitars sound! two switchblade scraping six strings that run from the denseness of early Wire to neo Beefheart catchy twisting breaks, post rock arpregios and moments of stunning inventiveness that can only sound like Fugazi.

And the songs! showing Radiohead just what post rock is Fugazi manage to keep the soul power, the anger, the positivity and emotion intact as they go and explore some nu sonic terrain- there’s no artful "ooh look how clever we are” bullshit going on here. With Fugazi its as simple as four people (now five with added percussion/drummer Jerry Busher) who know eachother inside out and just let the music pour out. There are moments of pure prog madness and psychedelia from a band that takes no drugs these are slapped back to back with adrenalised rushes of punk rock and then into weird time signatures that still keep the moshpit cranked is a mark of their fucking genius.

The audience is a mixture of old hands and nu metal kids checking out the hardcore legends for the first time probably c/o the bands endless namechecks in interviews go crazy. People know all the words- no matter how obscure, how personal, how ”Ë?emo’ everything is getting a sing along treatment. Its great to see a band that really means something to people’s lives, more than an affectation or a fashion marker Fugazi have transcended all the rock baggage and become a soundtrack- a highly principled and motivated soundtrack at that.

They come on with Ian Mackaye giving a typically forthright anti attack on Iraq speech, they stop the stunning early classic 'Waiting Room’ to tell some berk off for throwing bottles around, they hammer the stage with a sweat shod righteousness and they prove that combining the adrenaline high of punk frock with a post rock inventiveness, a free jazz spirit and an empowering political high that is all but absent in current rock n roll. Oh and everything is so damn catchy as well.

From the driving riffology of 'Break’ to ‘Place Position’s churning claustrophobia, from the aforementioned Waiting Room’s instantly recognisable driving bass line to the driving vitriolic 'Target’ Fugazi visit their extensive back catalogue.

All this has to be placed in a context with bands powerful uplifting politic, their total refusal to kow tow to the music biz game and their awe inspiring DIY ethic- all the key traits that were thrown up by the punk revolution but sadly ignored in the never ending greedy free for all of rock n roll.

It’s on nights like this that you can’t help thinking that Fugazi are the best band in the world."