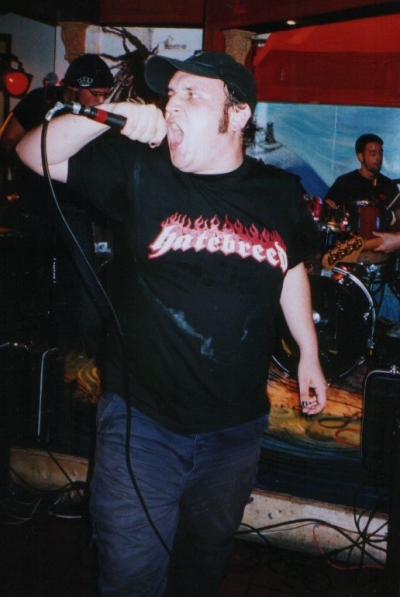 BRIDGE TO SOLACE (Budapest) playing at the Mumbo Arts Centre (formerly the Cyprus Tavern) on Princess Street. This was the band formed after the demise of the excellent Newborn (who had that split record with Catharsis). At the time I thought BTS lacked a bit of the intensity of Newborn, but their first record hasn't aged too badly despite sounding a bit compressed in that "early 00's" way. I think some of these guys stayed at our house and shared some excellent Catharsis tour stories.

The full lineup of this gig was Undying, Bridge to Solace, Paint The Town Red and Razor Crusade. Gig put on by Say It To My Face. I think it must have been last minute as I don't have a flyer.

Photographer unknown - possibly Heather sent it for inclusion on the morethanonecollective website, but I may be making that up.
Artefact added : 14th October 2016
by storminateacup