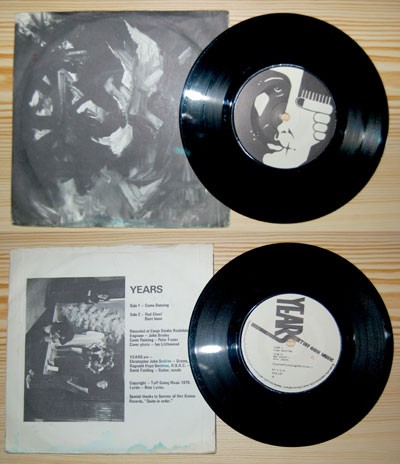 A three track 7" single from 'Years', who were a band that featured two future Chameleons in the line-up.

On bass was Reg Smithies, on guitar and vocals was Dave Fielding.

Recorded at Cargo Studios, Rochdale (as was everything at the time).
Artefact added : 5th June 2007
by jsz

PEDRO! Says –
Apparently there were few more tracks recorded after that 7" and according to C John Seddon they were even better

chris structure Says –
Interesting single but a word of warning for Chameleons fans its nothing like what was to come.
If you'd like to leave a comment, please Login. Login
Manchester Digital Music Archive is licensed under an
Attribution-NonCommercial-ShareAlike 4.0 International License.
Charity no. 1164179
Our archive currently contains 3714 Bands, 737 DJs, 1367 Venues, 252 Industry Professionals and 26418 artefacts contributed by 3771 members.