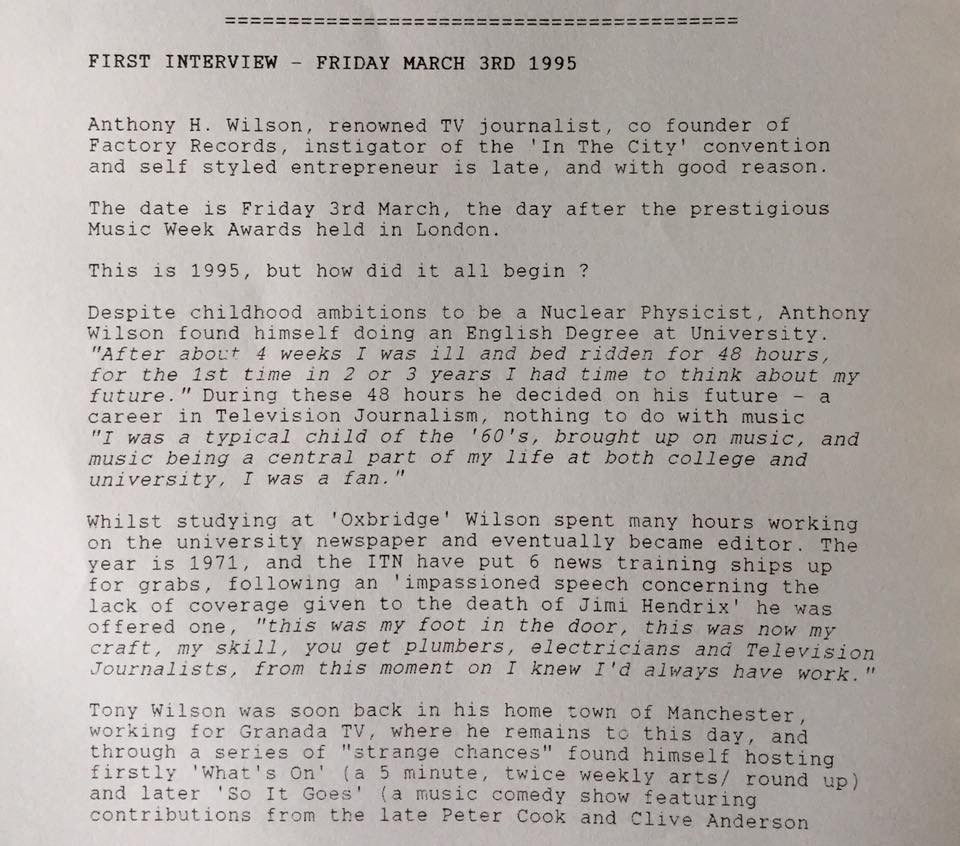 Two interviews done in 1995 with Tony Wilson (or Anthony H. Wilson, or AHW, or just Tony) around the time I was at Newark and Sherwood College doing a Music Industry Management course

For my 'project' I decided to write a comprehensive overview / review of 'Factory Records' (which I did... the sole owner of this document being my father until he passed away, at which point I got it back)

Anyway, on deciding to do something on Factory I thought it would make sense to try and speak Tony...

Amazingly, when I called up the Factory Office (at this point on Little Peter Street, Knott Mill) it was the man himself who answered. Somehow I managed to not stutter and was advised to keep in touch and 'drop by' when I was next home

The first of these interviews was carried out the night after he'd attended an awards ceremony in London... I arrived with my mate at 11am... Tony turned up at 1pm wearing a sharp suit, polished boots and sunglasses... (I still have the video of the interview somewhere too)

At the time 'The Big Issue' was in it's infancy and based in the city centre so I walked up, asked to speak to the editor (and future political advisor) Ruth Turner (I got her name from a copy I'd bought) and said 'I've an interview with Tony Wilson, do you want it?'

At the request of Tony this wasn't used by Tony as he felt it was too pedestrian and nice...the subjects covered many times before... but rather than let it end there, he invited me back to the Little Peter Street office...

I turned up at 1pm... Tony turned up at 3pm.... this time after being stuck at Granada in a Production Meeting... he was very apologetic and lent me a number of books featuring some of the favourite interviews he'd read for me to refer to...

We sat outside his office on the metal stairs and chatted for a couple of hours.. I was horrified when I got home to find the Dictaphone had been recording slowly as the batteries were dying so the playback when I come to transcribe it sounded like two robotic Mickey Mouse's...

Tony approved the second interview this version (with the football talk at the start removed) eventually published in the Big Issue in the edition dated 8th August that year...