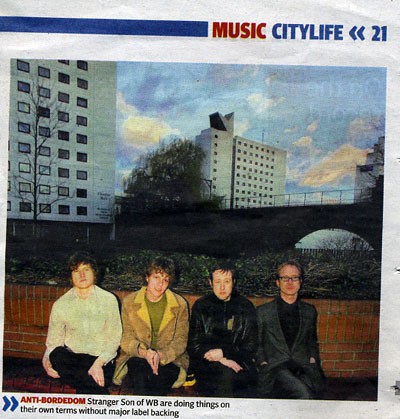 I'd not heard of this band until i read this...

the article reads, (this is a text recognition scan so it may have a few errors!):

'David Sue meets the band putting the punk back into the Manchester music scene.

"Our name?" ponders Gareth Smith frontman of cryptically-named primitive punk rockers Stranger Son of WB. "It doesn't really mean anything. We came up with it quite spur of the moment when a promoter was booking us for a gig. But I like the sound of it... it sounds quite grand and epic."

It's also a name tinged with irony. Because new Manchester
band Stranger Son of WB are less 'sons' than they are, well, 'fathers’. To be exact, fathers of the current Manc underground punk scene.

Manchester music historians might remember Gareth from
back in the day when he was the frontman in garage-punkers Thee Virus House. He's also joined by guitarist Tim Horrocks, a man whose six-string alchemy was a vital com-ponent of once-lauded space-rockers The Sonar Yen.

When the likes of Liam Fray or The Answering Machine were
still busy doing their maths homework, it was
left to bands like Thee Virus House and Sonar
Yen to keep alive the early-noughties Manchester underground punk dream - a time when Manchester live music was far from being in the rude health it's in today.

Now, after an extended hiatus, the key personnel from those
groups are back in the form of Stranger Son of WB (also as-
sisted by rugged newbies An-drew Cheetham on drums and
Zac Haynes on bass). And after laying those early punk foundations, they'll hopefully reclaim the dues they're owed.

That was a strange time for Manchester music," recalls Ga-
reth of the early-noughties Mane music scene. "Bands like
Thee Virus House, The Sonar Yen, Jackie O... they were coming from a much darker place than most guitar bands these days.

"There was a DIY punk mentality around those groups, it was more about necessity than trying to get signed to a big record company. In retrospect. Thee Virus House were more like a learning curve for me, but I can see there was something very honest and urgent about the music we made."

In contrast. Stranger Son of WB seem very much the complete article, Gareth's old-fashioned punk ethics still in place but also now informed by a sense of 2007 savvyness and steelyness. A thrilling alignment of The Stooges' fury, Captain Beefheart sonic terror and Black Flag polemic, they're uncompromising punk totems in an age when witless characters like Donny Tourette are trying to pass themselves off as punk saviours.

Gareth rants: "There are so many of these choppy, poppy-
haircut guitar bands everywhere. And they all claim to be punk But the problem is, they're not going far enough with their influences. For a lot of young bands, their musical knowledge starts and ends with the first Libertines album. Where’s the anger in these bands? A lot of these band are doing it for a career. For me punk has always been about anger and expressing it through music. There's a lot to get angry about. I turn on the television and there's something straight away that gets me angry. There's too much apathy amongst young musicians these days."

Gareth recoils the moment he, as puts it, "starts to sound like a jaded old musician... I'm only 28 for Christ's sake!". But his knowledge of Manchester and, in particular, the capricious nature of unsigned bands and the record business makes him an important, insightful and vital voice within Manchester music.

"I read your column in the Manchester Evening News every
week," continues Gareth, his voice now considerably more
vehement, and now jabbing his finger at your CityLife corre-
spondent "And I see all these bands, 18 year old kids get signed after three gigs. Who the hell are they? It's dangerous as far as I'm concerned. They're getting signed too soon and letting all these hungry record labels exert their influence on them. It's wrong."

If you haven't seen Stranger Son embraced by the more populist circles of the Manchester music scene, it's probably less to do with them than it is to do with myopic music promoters. Good job, then, that Stranger Son of WB's automonous DIY punk ethic manifests in all aspects of the band. From their amazing, visceral live shows at underground nights like Fight Club at Retro Bar to their self-funded, self-promoted releases like recent single Snakes, Stranger Son of WB are determined to do things on their own ethical, inspiring terms.

They're anti-boredom, anti-safe indie rock, and have cer-
tainly restored Manchester music's reputation for unearthing
brilliant, status quo-questioning new music.
"We don't have major label backing," says Gareth. "But even
if we did, we wouldn't be prepared to compromise for them.
The essence of punk rock music is about being true to yourself.

We'll be happy to release our own singles and albums for as long as we can afford it. My biggest punk heroes are The Fall, and they just keep on doing what they do regardless of popularity or success. They're dead inspiring. We'd be happy to follow in Mark E Smith's footsteps." '
Artefact added : 5th June 2007
by mat