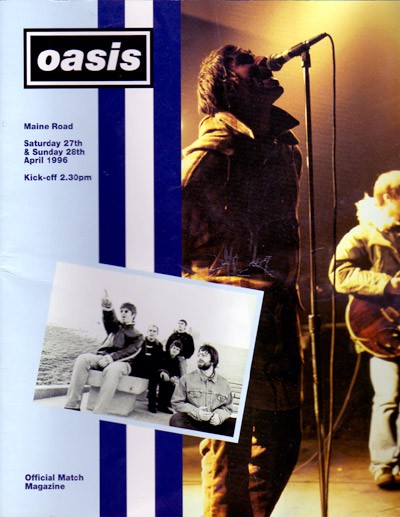 Didn't see much of the support to be fair. Ocean Colour Scene's set was interupted by a white kagool clad Liam Gallacher arsing about in the boxes at the top of the Kippax. The focus of 40,000 people was on him rather than OCS great rendition of ‘The Riverboat Song’.

Missed the whole of the Manics' set, queuing up for a pint. I came back to my seat with said pint after 40 minutes, much to the annoyance of my mate Jeff, who I forgot to buy one for. That's still raises a smile after all these years.

If memory serves me correctly, it was also the Islamic festival of Eid; I was nearly run over outside by a revellers in car doing doughnuts on the road. Great days.

After the gig, caught the bus back into ‘town’ (city centre to the laymen) and spotted the aforementioned man in the white kagool walking down the street. It wasn't Liam Gallacher after all...
Artefact added : 5th June 2007
by Gaz Shaw

mat Says –
do you remember how dangerous it was outside? my friend - a 28 year old female - got punched in the face and had her two ticketss grabbed off her. ther was a really heaavy atmosphere and i was glad to get inside to be honest. i went to see oasis at the last manchester gig, and it was pretty similar there too.

Gaz Shaw Says –
Very laddish. It was a mad summer really with Euro '96 and all. I do remember having to queue up for ages to get in and being piss wet through as a result, it wasn't the warmest of days.

Tony/Longfella Says –
Interesting to talk about "laddism". When the phrase "new lad" was first coined it's original meaning was an attempt to define the territory between (the idealised, some would say emasculated) "new man" and the "Sid The Sexist" stereotype of the Lad. That is, to recognise that it is perfectly possible to change nappies and not be a total chauvinist pig but to still like the odd pint, a bit of blokey banter and be interested in the half time scores.

Then came the whole Loaded/Oasis/Ladette thing and "new lad" quickly came to be used to mean the same as "lad" has always done. Wherever you stand on that debate, it's interesting to note that, not for the first time, Manchester music was not a fringe phenomenon but at the centre of national cultural debate and change. Or summat.

Rudi Keegan Says –
Very nasty atmosphere outside but was ok, I think it got much worse on the Sunday .going for a piss you had to run the gauntlet of thrown bottles and rocks ,which was great fun at the time !!

marcegol Says –
Hi there: i'm seeking for a pic of this place for my book of historic Rock places in Manchester to be published in Argentina this year. Do you allow me to use this one? Cheers