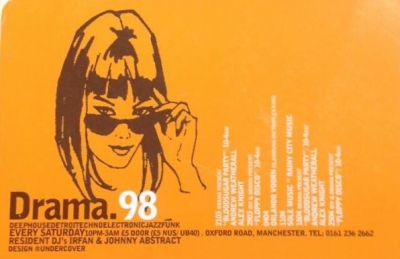 Drama.
The Music Box.
Oxford Rod.
Manchester. 1998
From start to finish, an exercise in what a proper Night Out should be...
easygoing bouncers, led by the legendary Twinny (former Joy Division Roadie/Crew)

Then down the steps to be welcomed (and often waved in for free) by the one & only Marie, aka Mrs Drama

Music supplied weekly by residents such as Irfan & Ifty (Rainy City People) and Johnny Abstract aka Mr Shifter (Timperly Techno Terror) and his unmatched, mind warping, grin inducing, rare as f**k collection of Detroit Techno, a lot of which I’m still trying to get me head around over 20yr later!! (Juan Akins, Underground Resistance, Ron Trent)

We were Blessed, truly