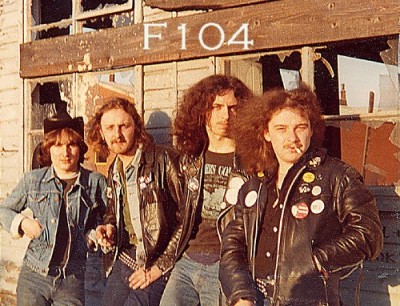 I was the lead guitarist in F104.We rehearsed and played regularly at the Spread Eagle Hotel and were the first band in the area to use special effects and pyrotechnics in our stage act,which meant of course that other local bands just had to copy us.Billy the landlord used to dread booking bands that used pyro's because the smoke drifted through the pub and up to the living quarters upstairs."Crazy"Colin Rowe our resident pyromaniac can now be seen on BBC 2's "Top Gear" sending rocket powered Mini's down ski slopes and Reliant Robins into outer space.
Billy used to pay us £15 a night which did'nt go far between six of us,but we rehearsed in the cellar for free so it were'nt too bad(if you did'nt mind mushrooms growing out of your speaker cabs because it was that damp and getting a bollocking every time you blew the fuses).If we were on on a Saturday night and could'nt be arsed packing up we played Sunday afternoon for free.Although the Spread had a somewhat bad reputation,it was a good pub with good people and there were'nt many others in the area that could match it.
Artefact added : 5th June 2007
by Arnie

mat Says –
this is great- there seems to be a lack of any heavy-rock manchester bands- or at least you never hear of them. was there a proper scene?

Arnie Says –
There sure was.In Tameside there was The Commercial and The Talbot(both Stalybridge),The Spread,King William and The Gamecock(now the Witchwood)in Ashton-Under-Lyne and The Queens in Hyde.In Oldham The Tower Club and the Lancashire Vaults and in Manchester,Henry's, the Phoenix and loads more.They mainly booked local bands, and as it was the mid 70's early 80's with the NWOBHM backlash against punk,there were dozens of them knocking about all over the country.Going off the A-Z of bands on this site there's only a couple of local heavy rock/metal bands and venues that are remembered,I don't know why,it was more than a scene...........it was more of a movement!!.

Tony/Longfella Says –
UMIST was the place for heavy rock "discos".

Things were pretty tribal in those days between "heavies" and "punks" although Gary Bushell (yes that one) in Sounds had a Total Noise chart which would put Metal, Oi and Exploited-type post-punk bands together.

I went down the post punk path myself but retain a soft spot for early AC/DC -I paid a bouncer £2 to see the Back In Black tour. I think it was AC/DC, The Jam and The Ramones within about 3 or 4 nights. I've got all the tickets somewhere but can't put my hands on them.

mat Says –
if anyone's up for it i would love someone to write a piece about the heavy rock scene in Grtr Mcr - it will go in our new 'writings' section (when it goes live-watch this space!)

Arnie - you're email adress is bouncing... do you have another one so I can contact you? m

LozzyB Says –
I think it's all coming back to me - your singer was Dave (?), he penned the anthem 'Rob Roy'...or maybe I'm losing it. I saw F104 many times around Manchester (notably Ashton and Denton). Thanks for the namecheck - I played bass for JSRSRB (with Colin, Steve and Baz...all sounds a bit Spinal Tap!)

sdeehess Says –
Hi loz I remember singing rob roy at the boundery at guy bridge, i got up and did three songs before a jsrsr gig it was valentines day 1978
regards
Dave Smith

LozzyB Says –
Hi Dave, great to hear from you. Oh yes! I remember the Boundary well (the pub felt like it had been pencil-sharpened and one end...the bit we played in) I remember your rendition of Rob Roy (I can still sing the chorus - brilliant!) and remember that you went down better than we did (deservedly). I also remember that Col (our singer) wore a particularly tight pair of oyster coloured velvet kecks at one Boundary gig. Such was the rear view that as Col stood at a one armed bandit, an ostensibly hetero punter remarked to his mate that he had become somewhat aroused. No doubt our punter's excitement evaporated when Col turned to reveal his gender! I'm not sure this is a suitable space for swapping gig stories...so, on to other matters, I've been in contact with Arnie ('great to hear from him!) and he's filled me in on developments. I'm trying to get hold of your demo if possible. I'll trade for crap old JSRSRB recordings (rendered in sparkly digital format)! I wish I'd known of the F104 reunion - I'd have been there!

mat Says –
this is just the place for swapping gig stories! please do...