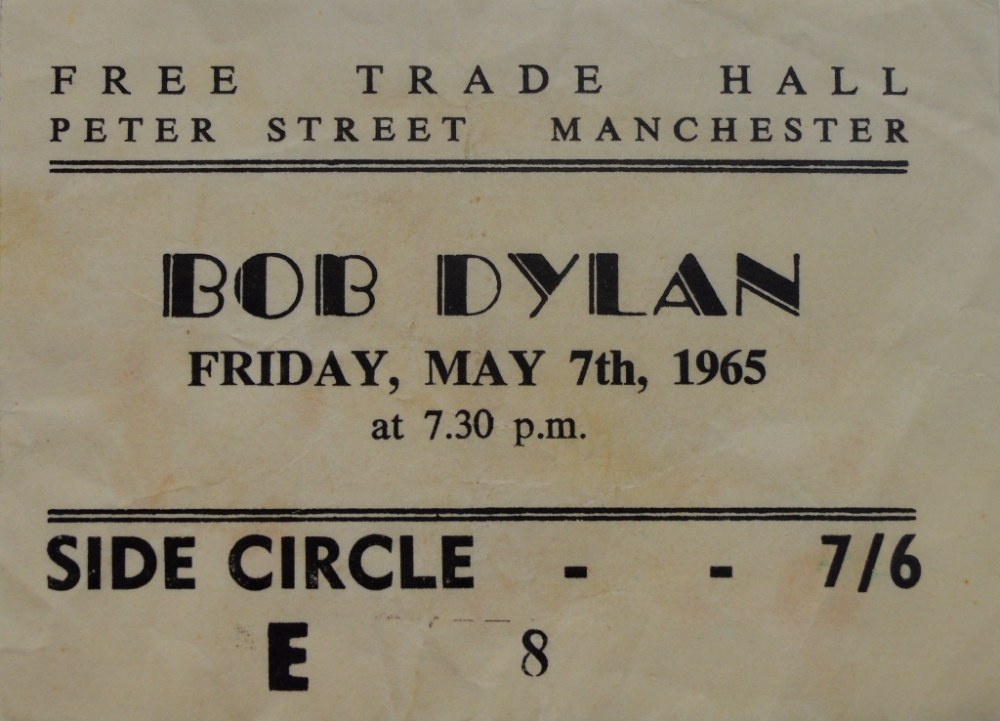 Ticket for Bob Dylan's May 1965 solo acoustic gig at The Free Trade Hall. Sadly I wasn't old enough to attend (I was 9 at the time!) - this precious ticket was kindly given to me by my friend Pat George, who was cool and smart enough to be there!

Just at this time, Bob was at the top of his game and really starting to hit his stride as he moved away from protest singer to performing artist and all round genius. The set he played that night was:

He raced through ‘The Times They Are A-Changin’ – he couldn’t wait to finish it because he’d moved on and was now bored by it. It was no coincidence that ‘It’s All Over Now Baby Blue’ was the final song of the gig. He was still only 23 years old.

He’d arrived in England at 9.35pm on 26th April for an 8 date tour to promote his new LP, ‘Bringing It All Back Home’. He was in a country that had been governed by Harold Wilson’s Labour party for only seven months; where the cinemas were showing ‘The Sound Of Music’ and where the charts were dominated by Roger Miller’s ‘King Of The Road’ and The Beatles’ ‘Ticket To Ride’.

Bob played in Sheffield, Liverpool, Leicester, Birmingham, Newcastle and Manchester – in that order. Just two days after this show, he played a pair of stunning Royal Albert Hall gigs that were attended by The Beatles and which were to be his last ever solo concerts. Accompanying himself on his beautiful Gibson ‘Nick Lucas’ guitar, he played these same fifteen self-penned songs in the same order at every gig of the tour. The whole thing was filmed by D. A. Pennebaker for what would eventually become the classic road movie, ‘Don’t Look Back’.

Almost exactly one year later, Bob was to be back at the Free Trade Hall promoting his seventh LP, ‘Blonde On Blonde’, and causing mayhem with his electric band and their ‘thin wild mercury sound’. On that occasion, he provoked some poor bewildered chap into calling him ‘Judas’. That's another story!
Artefact added : 9th August 2017
by IanTatlock

lssg# Says –
I was 16, and I was at that concert. It was something of a religious experience for many of us. I wasn't really aware of the amazing sound quality at the time but you can hear it on the recordings.

I liked your piece. You might want to take out the mention of Dr Zhivago, though, and cite another film instead, because it came out later than that in the UK.
If you'd like to leave a comment, please Login. Login
Manchester Digital Music Archive is licensed under an
Attribution-NonCommercial-ShareAlike 4.0 International License.
Charity no. 1164179
Our archive currently contains 3869 Bands, 758 DJs, 1460 Venues, 323 Industry Professionals and 29710 artefacts contributed by 4047 members.