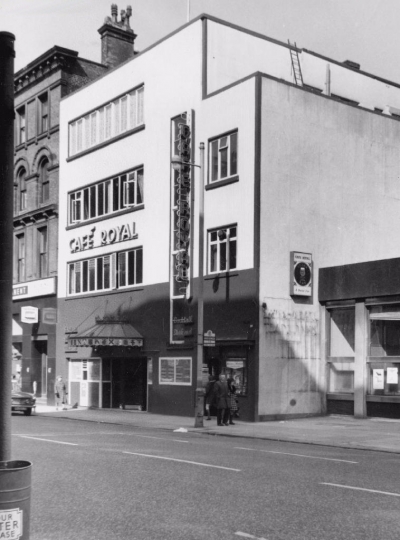 A slightly upmarket hang-out for gay men in the 1950s was the Café Royal.

Situated on Peter Street just beyond the Midland Hotel (which also contained a gay friendly bar called the Concord.) Now a Subway – on the opposite side to Pizza Express.

Musically, like most gay-friendly spaces at this time The Royal centred around live piano.

‘Cigarette smoke and chatter and music were drifting up to meet them. It was a long narrow room with curving thirties counter undulating right down the left-hand side. The pianist was tucked away in the corner; he had several glasses of gin, each one accompanied by a little bottle of tonic, lined up on top of the grand piano. Behind the pianist, opposite the counter, was a wall full of alcoves. The alcoves were full of fairly posh-looking couples – men and women. Could he be in the right place? Another quick glance round the whole cocktail bar and he had the ground rules straight. They were a bit like life itself: queer people were standing warily on their feet while normal ones were sitting down.’