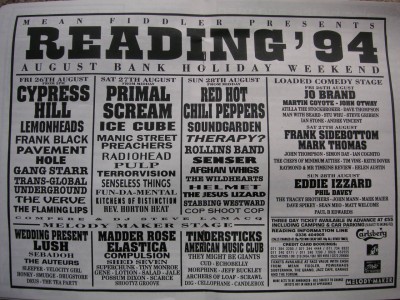 The years between Madchester and Britpop were The Grunge Years for many indie fans. Not golden years for Manchester music as evidenced by the paucity of Manc acts on this bill.

Interesting to see some of the big names low down the bill. Jeff Buckley mid-bill in a side tent.
Artefact added : 5th June 2007
by Tony/Longfella

Abigail Says –
Saw Jeff Buckley in '94 at the Main Debating Hall, still think about that gig now. I uploaded my ticket a while ago.

JaneD Says –
I was at this festival, but don't remember much, except having to listen to most of Madder Rose from the tent as I was so ill from self inflicted indulgence starting with wine for breakfast. I do recall the Wedding Present, well bits of it, and being utterly stunned by a wrecked Courtney Love rolling around on stage like a whacked out hag, which is pretty much how i ended up actually...except I was not on stage.
If you'd like to leave a comment, please Login. Login
Manchester Digital Music Archive is licensed under an
Attribution-NonCommercial-ShareAlike 4.0 International License.
Charity no. 1164179
Our archive currently contains 3683 Bands, 733 DJs, 1340 Venues, 233 Industry Professionals and 22817 artefacts contributed by 3698 members.