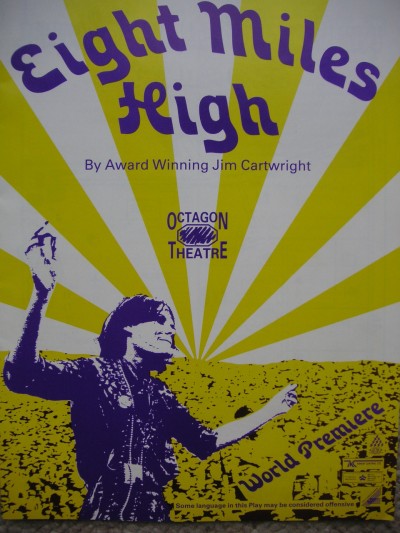 A programme from the musical/play Eight Miles High written by Bolton's own Jim Cartwright.

The show centred on the fictional Lancashire "Clough Hall Music Festival", complete with site map on the inside cover. Set in 68/69 with musical covers from the era.

An earlier Cartwright play at the Octagon had starred John Cooper Clarke.

Alastair Says –
Would have been interesting to see.
If you'd like to leave a comment, please Login. Login
Manchester Digital Music Archive is licensed under an
Attribution-NonCommercial-ShareAlike 4.0 International License.
Charity no. 1164179
Our archive currently contains 3734 Bands, 739 DJs, 1424 Venues, 260 Industry Professionals and 27896 artefacts contributed by 3856 members.