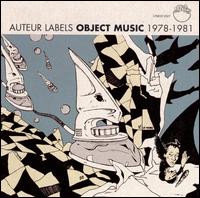 Auteur Labels: Object Music 1978 - 1981
Various artists, including Spherical Objects,
Steve Miro & The Eyes, The Passage, Steve Solamar, Noyes Brothers, IQ Zero, Contact, The Warriors, Grow Up, Alternomen Unlimited and The Manchester Mekon.
Duration: 01:15:52
One of the earliest independent labels in Manchester following the impact of punk, but also arguably the most obscure over time, Object Music, founded by Spherical Objects leader Steve Solamar to release his band's work, had completely disappeared from formal circulation after he wrapped up the label in 1981. The sole exception to this disappearance was the Passage's earliest work, which LTM re-released in 2002. Six years later, LTM was able to do a full retrospective on the label's releases, covering not only a slew of individual albums but creating this overview, pulling together a variety of album tracks and otherwise unavailable single and compilation songs as a handy starting point for the curious.
Artefact added : 23rd October 2017
by Francis