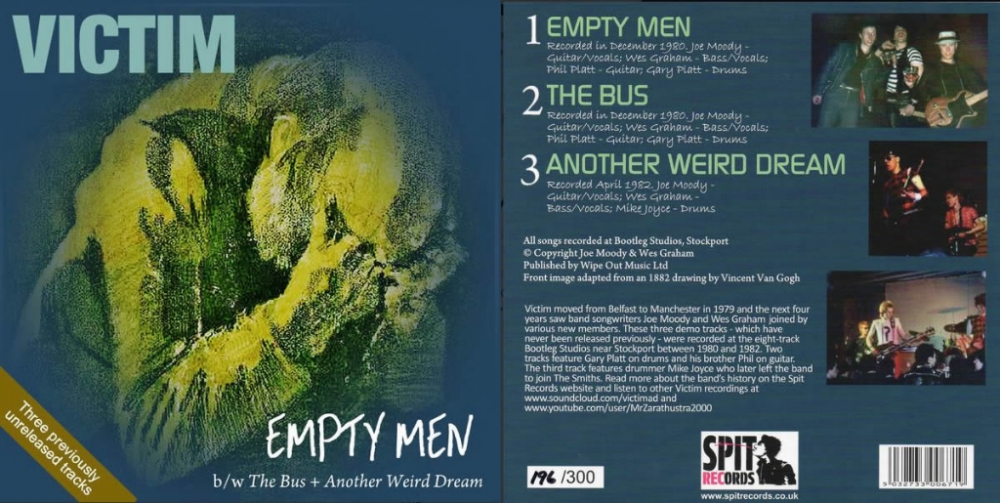 "Victim" was a Belfast punk band I was in with my brother Gaz during the 1980's, we joined when Wez Graham and Joe Moody came to live in England being tired of the troubles happening in Ireland, (the original drummer was Mike Joyce who went on to join "The Smiths", Victim were also featured in the cult punk film by JT Davies "Shell Shock Rock".

My own journey with Victim ended after a gig at the Bolton Sports Centre where rioting Victim fans trashed the place after "Rezzilos" singer Faye Fife smashed a cast iron mic stand over a young female Victims fans head, blood, destruction, police and ambulances were not my idea of having a good time so I left to concentrate 100% on my own band "The Ride" which I was already working on alongside the Victim project (hence the "Bootleg Studios" connection).

Joe Moody (who's songwriting I always really liked) went on with many other bands and solo projects and as far as I know still does so today, the single "Empty Men" is one of Joe's re-releases (release date 2014) of many Victim songs, although only a limited edition of 300 incredibly sold out almost immediately proving that punk is still very much alive. :-D

Another anomaly with the Victim saga is that many years later I met and worked a female drummer called Wendy Butler-Murphy AKA "Violet Venom" during the mid 2000's whom I have done much work with since on "Dark Side Of The Earth", "Tin Of Snakes" and "The Manx", so what is the anomaly about this? Wendy ended up joining an English version of Victim, also from the eighties and also a punk band, ironically Wenz is also part Irish!!! "with one breath, with one flow, you will know...synchronicity (Sting), small world...wouldn't like to paint it though!! hah hah :-D