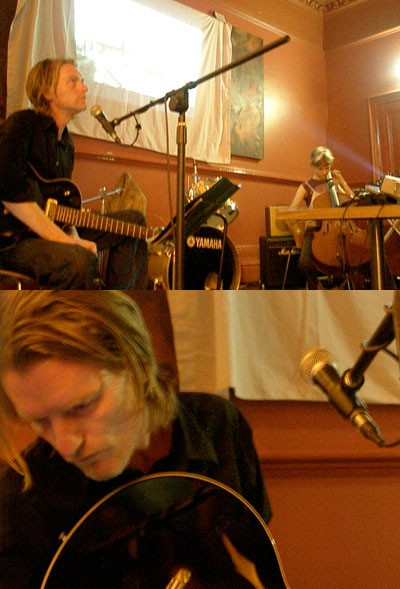 The date. Unlucky for some.

including At Swim Two Birds. It wasn't a great gig for them. a lot of chatters in the crowd.

Roger Quigley from the Montgolfier Brothers playing as his 'side-project' (who seem to play more than the MBs).

I think Roger (and MB cohort Mark Tranmer) are very talented writers and if you don't own the MBs album The World is Flat, then you should. Beautiful melodies, gorgeous instrumentation and lovely lyrics (with strong Salford content) - i still find it hard to believe that it's a pretty 'unknown' Lp - except in Spain where they're a treasured band.

At swim ain't too different but this wasn't their best gig. The crowd were a bit rowdy for this quiet music and we could hardly hear the cello (sorry i don't know the celloists name). I think Roger was a bit miffed but that's the problem with performing such quiet songs. he played to a backdrop video of a James Mason doc. 'The London nobody Knows' (1967) where Mason walks through the streets of the east end keeping the riff-raff at arms length with his brolly...
Artefact added : 5th June 2007
by mat