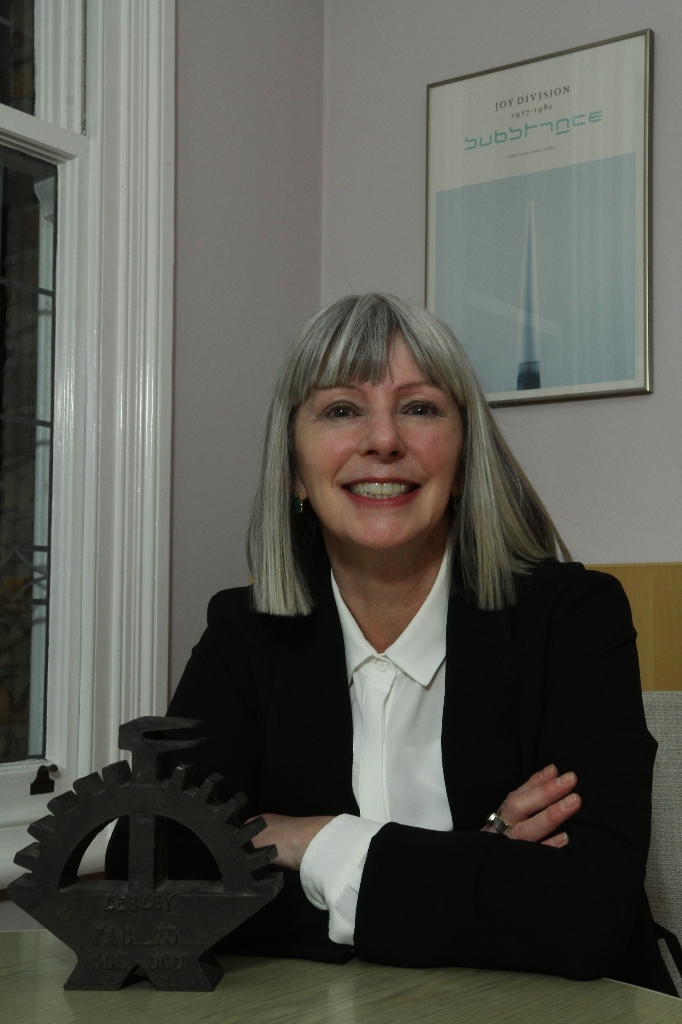 “I don’t tell people that I used to run Factory … ”

Lesley Gilbert was born in Crumpsall Hospital on 6th September 1953 and grew up in Failsworth, North Manchester. She started working for Factory in June/July 1980 where she already knew the people involved because her partner, Rob Gretton, was Joy Division’s Manager. Lesley was the Production and Office Manager at Factory from mid-1980 to September 1985.

Lesley has generally stayed away from the ongoing, iconic adoration of Factory and all that this entailed. Lesley was not greatly surprised when Factory ended but was saddened by its demise. She had previously left to have her and Rob’s son and focus on motherhood, but Factory was obviously still very close to her. Lesley is rightly proud of what she achieved alongside Rob but says that she “didn’t see it as important”. However, when she was approached to be part of the Suffragette City exhibition she was immediately drawn to the approach of the historical and contemporary parts played by women in the Manchester music scene. Lesley thinks it is a brilliant idea to make these women more visible because “unless you’re involved you wouldn’t be aware of them” and that “people will be very surprised at how many there are and always have been”. In this way Lesley epitomises the spirit of the exhibition in terms of making women who are or have been behind key parts of the music culture in Manchester known to the wider public.

And what could be more emblematic than Lesley’s work with Rob at Factory and the work with Joy Division and New Order? Lesley has previously worked over the years with the Manchester Digital Music Archive, most famously publishing the book ‘1 Top Class Manager’, in which she shared Rob’s work notebooks from his days of managing Joy Division, giving an insight into Rob’s methodical approach and pure hard graft during that time. Lesley says that she “really wanted to do that for our children who are really proud” of their parents’ work and history. Whilst Lesley is, of course, familiar with the various portrayals of Rob in films etc she says “they’re still stories”. And they are also part of an overwhelmingly male cultural representation.

Lesley is hugely supportive of the idea of young women engaging with the exhibition and for them to take something really positive from it. Whilst Lesley acknowledges that there has been some improvement on a generational level, she is conscious that the part women are seen to play is still balanced in favour of men. She is happy to see the gradual change and often reflects on how women used to “trivialise ourselves and anything we did of any importance”. Putting herself in the spotlight is not Lesley’s usual thing and says “this is very different, this is about me” and she is happy to be in such good company with the other women involved.

Reflecting on the heady days at Factory, Lesley also says that it was a long time to realise “we’re making history”. She says she just didn’t know at the time and highlights the role of social media now, where fame and reputation can be shared so easily whereas “things weren’t as instant then”. And particularly as a woman she thought “It’s just my job”.
Artefact added : 13th February 2018
by mdma_volunteers

Chris Whyatt Says –
I was lucky enough to know Lesley well from 1978 until 1990, as Rob Gretton was my brother-in-law during that period. My youngest son is also called Rob for that very reason. Lesley is a lovely person, and was a huge force behind the larger-than-life Rob Gretton. I saw her a few weeks after Rob died and we shared some funny stories.
If you'd like to leave a comment, please Login. Login
Manchester Digital Music Archive is licensed under an
Attribution-NonCommercial-ShareAlike 4.0 International License.
Charity no. 1164179
Our archive currently contains 3861 Bands, 758 DJs, 1458 Venues, 316 Industry Professionals and 29645 artefacts contributed by 4033 members.