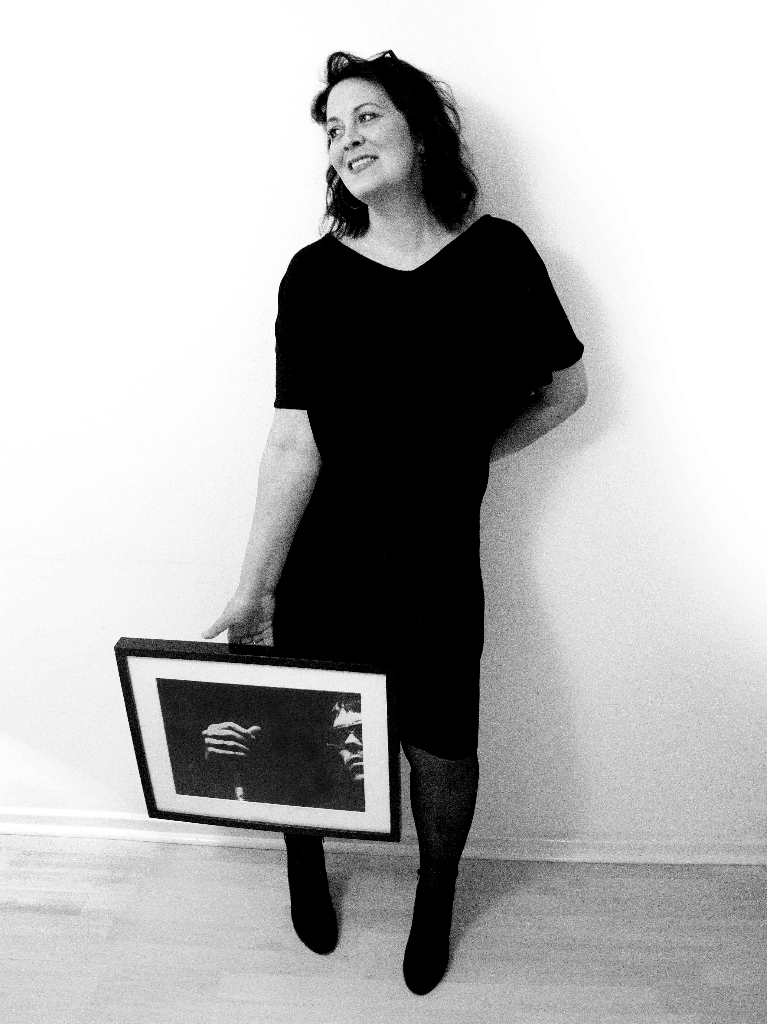 Shari Denson has been producing images of bands from Manchester and much further afield since 2002. Probably best known for her grainy, often stark and high contrast black and white images her work has been used by Ian Brown, Elbow and I am Kloot to name but a few Northern bands she has worked with.
Her photography is full of energy, movement, emotion and contrast, making her style unique and recognisable.

Shari started attending gigs aged 10 when her older brother would take her to see bands such as The Teardrop Explodes and Echo and the Bunnymen at Manchester Apollo. Growing up this was to be a regular haunt for her – somewhere she felt excitement and awe.

“As a child, I used to look at old, contrasty black and white photographs of my dad with his guitar, as the frontman of the covers band he was in in the 60’s. I was completely awe-struck, I would gaze at these photos for ages, so amazed at my dad. To me, he was the coolest rock star. His influence went further than that, though. He was a keen photographer too, and used to describe to me how as a teenager he’d used the under-stairs cupboard as a darkroom. The process he described sounded magical to me. Little did I know that I would go on do exactly the same as I got older, processing my negatives under my stairs. There’s something utter enchanting about doing that, having to wait and see your images in negative form as you stretch the roll out and hold it up to the light at the end of a relatively long process….the excitement and then the pure joy when you see that the shot has come out exactly how you wanted it to. Magical.”

Shari did a degree in Film Studies in Sheffield at the long-gone Psalter Lane campus and was set to major in film production but, after taking a year out to have her first child, she decided to major in still photography. This would offer her the flexibility she needed as a single parent. This was when Shari’s previous flirtation with taking photos (with small compact cameras) as purely personal momentos became a viable project for her degree. She started to request photopasses and borrowed the equipment she needed from uni, and used their darkroom to hone her skills. She experimented with different black and white films and different ways of processing and printing until she found that push-processing Fuji Neopan 1600 film, and printing in stronger, warmer chemicals would give her the rich blacks she loved to see. Printing with some contrast finished off the look she became well known for.

After starting to contribute to The Fly Magazine in 2003, under live editor Andy Inglis, Shari’s opportunities flourished and she was soon photographing the bands she loved, and they seemed to love her style.

Her image of I am Kloot, taken in Vienna for The Fly Magazine, was used widely by the band, and on The Mercury Awards 2010. Elbow asked Shari to photograph them at Blueprint Studios in 2007 upon finishing recording ‘The Seldom Seen Kid’. An image from that shoot has been used everywhere from Radio Station websites, to lesser-known blogs, to youtube videos, Amazon.com and Later with Joolz Holland.

Ian Brown licensed Shari’s image of him, taken during his gig at The Eden Project in 2005. It was used on the artwork for Brown’s 2007 album ‘The World is Yours’. This is the image that Shari cites as being a game-changer for her. “I was approached by Ian Brown’s management and told that Ian wanted to use it on the album. We agreed a figure for them to licence the image for a one-off use, a contract was signed and I was paid fairly. Not only that but Ian graciously signed some prints of the image which we auctioned for charity and he was more than happy to do this. The prints did well and raised £1000 to help children in Sri-Lanka who were affected by the tsunami. This spurred me on after several disappointing experiences, where I struggled to be treated in the way I had hoped to be by some in the music industry. This experience gave me a lot of confidence, and the belief that I could become established and recognised as a band photographer.”

Over the years Shari has continued to photograph and support lesser known, independent bands and since 2014 has returned to her love of the moving image, directing and producing music videos for Manchester bands such as Blaney, The Winachi Tribe, The Northstand, The Tapestry, The Backhanders, and The New Southern Electrikk.

On being a woman in the music industry, Shari says “It can have its challenges and its benefits, like anything in life. I love what I do and I’ve worked with some amazing people. I’m very proud of what I’ve achieved – that I managed to establish myself as a photographer and be recognised as such by men and women alike.”
Artefact added : 13th February 2018
by mdma_volunteers