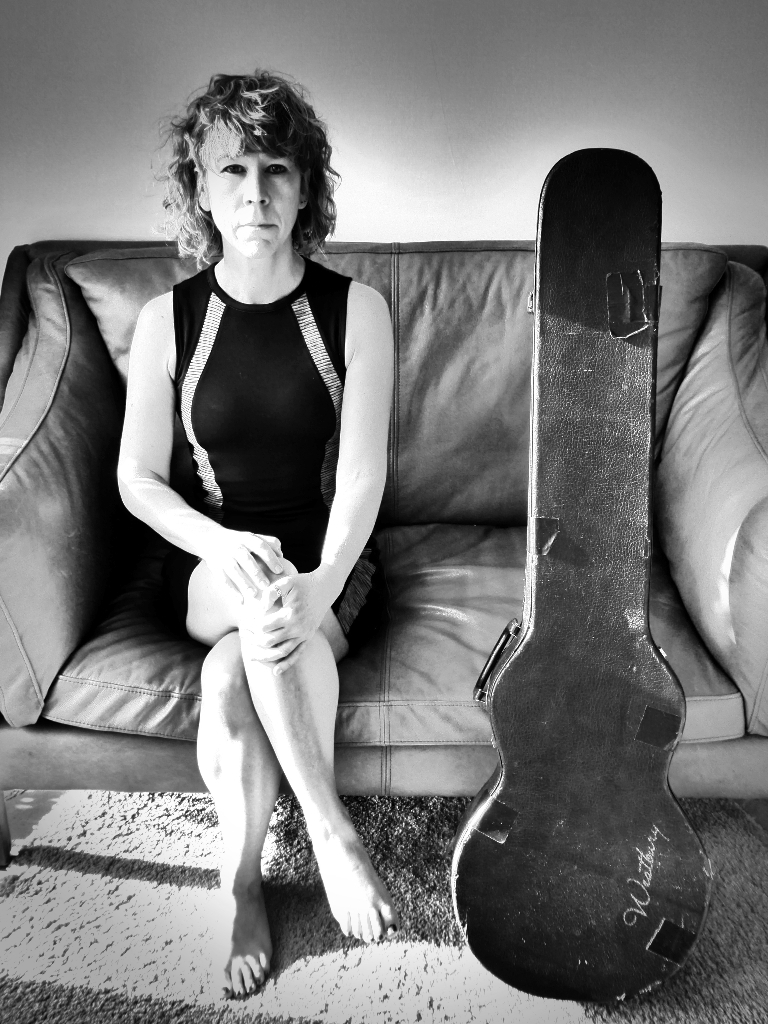 I took up bass guitar almost accidentally nearly 40 years ago. I’m still playing in bands now, because I enjoy it: playing the bass, with other musicians. My bass playing style is more about intuition than skill I think. The sound from those four strings can be huge.

I joined the Performing Ferret Band because they were friends – to start with I was backing vocalist and ‘additional’ instruments (including stylophone!) Then their bass player left so I bought a bass guitar and a ‘how to play bass guitar’ book, and 2 weeks later in April 1981 I was in Stockport’s Hologram Studios to record and ‘mix’ our album in 1 day. My lack of bass playing experience matched the band’s inept ethos perfectly. Music archivist Johan Kugelberg later described the Ferret’s album as ‘The most seminal LP to come out of (post-punk) DIY’. I lino-printed the ‘field of yellow flowers’ picture for the cover and stuck it on the album sleeves, at least 346 of them, it took me ages. (The others were away at university, I’d just left school and was having a year out).

The Performing Ferrets fell apart live on stage at a gig at the Cyprus Tavern. I played in a few other bands in the early 80s - The Floating Adults (the Ferrets attempting jazz), King Biscuit Hour (not sure if we actually wrote any songs), the Horseheads of Hulme. Mark Hoyle saw the Horseheads at The Venue, a small club next to the Hacienda. Maybe a year later we bumped into each other in the White Horse pub in Hulme – we didn’t know each other - and Mark asked if I would play bass in his new band, dub sex. Which became the band where I really developed my bass sound. Palpitating rumbling dub bass, exactly right for Mark’s intense vocals.

Before we’d done more than a handful of gigs, John Peel picked up on dub sex from a flexi-disc release in Dave Haslam’s Debris magazine in 1986. We were all driving back from a band rehearsal when we heard him playing ‘Tripwire’ on his radio show and saying he must get us in for a session. Three more John Peel sessions and a handful of TV slots followed. We released several EPs – Swerve was no 39 in Peel’s Festive 50 in 1989 - and a compilation album, ‘Splintered Faith’. We gigged with Inspiral Carpets, Wire, Happy Mondays and the Stone Roses. We were there at the beginning of Madchester but didn’t fit in to that scene. ‘Time of Life’ was our last release, with its Edward Barton-directed video of us being buried up to our necks in mud in a quarry in Glossop – the review in City Life magazine: “Where the Happy Mondays sound like they’re having a ball, this reeks of despondency”. It didn’t look like dub sex were going much further and I left the band in 1990 to tandem cycle back from Sydney on a ‘Ride for the Rainforests’.
2 years later, back in Manchester in 1993, dumb was formed, bringing me and Mark together again with a brilliant percussion section. We played over a hundred small gigs over 5 years, recorded another John Peel session, and released 2 albums including ‘King Tubby Meets Max Wall Uptown’ funded by an Arts Council grant. That’s the record release that I’m probably most proud of.

I’ve been involved in all sorts of projects since then. In the 2000s Mark and I played together again in ninebar, and I gigged and recorded 2 albums with Calvin Party. In the 2010s – I’ve played with a reformed Rainkings with Stephen Holt from the Inspiral Carpets, releasing the ‘Fiveways’ EP, and in the last few years, dub sex have got back together to play some shows.

Now in 2018, there’s a brand new project, involving me and Mark again, no name as yet.

My picture in the MDMA exhibition is of my bass guitar and its case. I used them both at gigs in 2017, and at my first Performing Ferret Band gig in 1981.
Artefact added : 13th February 2018
by mdma_volunteers