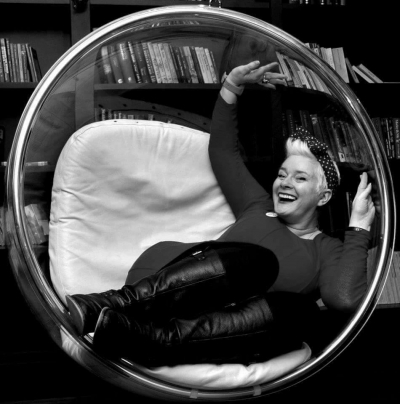 How hilariously humbling that a Yorkshire lass should get a GM Award! Born in Scotland, but brought up in Huddersfield, I knew I wanted to be some kind of artist, and I treat photography as an art. I attended DABTAC in the 80s, we had smelly chemical-fumed-filled dark rooms, crazy fashion and funny tutors, my important soundtrack to that time - Echo and the Bunnymen, Cocteau Twins, Human League, Soft Cell, and Barry Manilow (what? don’t laugh). I’d sit for hours in my bedroom, record player on full blast, whilst I drew/painted.

After moving to London and back, then up to Newcastle, I worked for years managing photo-labs until I went self-employed, and for twelve years was primarily a wedding photographer, it brought all my joys together, I could cheerfully boss folk about, take photographs, plus make the days as fun and relaxed as possible. I still LOVE photographing weddings.

Fast forward to 2011 and thanks to Graham and the Inspiral Carpets, I started in music photography, then at The Charlatans in Mcr, I met up with John Robb soon after started photographing for Louder Than War, which, if you’re first starting out in music photography is a good way in; being able to say you work for an established magazine gets you (often) into most pits. Once you make the right connections in Manchester you can suddenly know a vast majority of the music scene. A MASSIVE thank you to my friends Jacky Carroll and Ziggy Lavelle, who helped me those early days. I’ve found myself in dressing rooms with most of the MCR legends, bumped into others in pubs and clubs and never take it for granted. Friends I met and worked with and many I still continue to do, Rikki Turner, Alison Bell, Paul Leveridge, Johnny Marr, Keith and Joe Moss, “Conversations” with Dave Haslam, my on-going Jonny Brown film, Chic, Howard Marks, Joe Duddell and Ali Hudson, James Masters with Hooky and The Hacienda Classical, Dave Beer, Church/Leeds and Back to Basics, Shaun and Joanne Ryder, Videomachine, Tokyo Industries, The GM Fringe, Viva Magazine, Laura Graham with Vital Management. Acting also spurs my creativity and Julie Hesmondhalgh, Becx and Grant inspire me as I photograph Take Back Theatre year after year.

One difficulty with music photography is getting paid, I don’t know if it’s because I’m a woman, because I’ve never tried being a man, but 2017 my work felt validated*, being paid as well as being asked to work for such fantastic events, it took me five years of hard work to get there though. I worked with Biff Mitchell at Glastonbury, Dave Beer at Church/Leeds and the Millennium Square gig, and Ben, Andy and Meredith Peterson of From the Fields, who asked me to take behind the scenes photos the workings of their festivals, capturing the crew as well as artists; and I’m very excited to work them again in 2018.