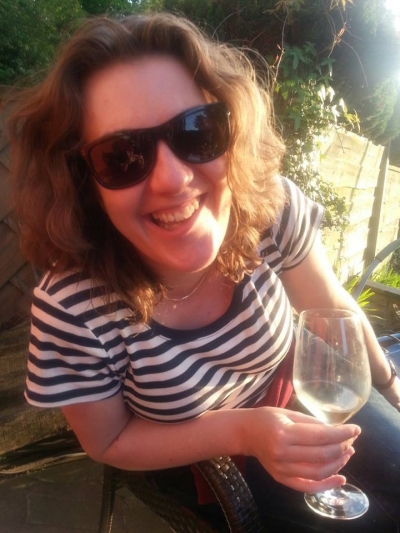 As a child, Kate would answer Bet Lynch to anyone enquiring as to what she wanted to be when she grew up.

After discovering the joys of formation dancing and Malibu and coke in Oscars nightclub on Clacton Pier with her schoolfriends, Kate’s idea of a good night out expanded exponentially after working in Ibiza for the summer of 1989. She moved to Salford to study in 1991 and is still delighted to have scraped a third class degree in TV and Radio Production with her final project a 30 minute documentary on the creation of Sankeys Soap. Apart from reading, going out was her favourite thing, so it made sense to seek employment behind bars in cool night spots.

After stints in Ten Bar, PJ Bells and Brittania Hotel(!) Kate ended up in what was then a newly opened basement dive bar blues venue just off Piccadilly Gardens called The Roadhouse.

She loved it there. The owner, John Macbeath, had been a publican for a long time and was the most genial host. There was a pale and friendly community of long-haired misfits, music geeks and ZZ Top lookalikes. Mark E Smith drank there frequently. After The Fall performed a residency (and Ric Michael became promoter) the venue broadened its musical horizons, even investing in new club night Electric Chair at Kate’s behest. She became licensee and manager just in time for the late 90s indie boom.

John Macbeath was now enjoying a career repping for SJM (he adored hanging out with rock stars) and decided to abandon the club in 1998. Kate was confident that it was still a viable business so she formed her own company at 25 along with Stephen Richard Lloyd and carried on. She was right.

For ten years Kate and team worked and played hard at the club, maintaining its status as both legendary local institution and a respected member of the national “toilet tour” circuit.

Meanwhile, a former member of Roadhouse staff and good friend Mary-Ellen McTague had been learning to cook really well at The Fat Duck. Upon returning to Manchester she sought Kate out to join her and husband in opening a restaurant. Kate is easily persuaded into most things and was also ready for a new challenge, so Aumbry opened in Prestwich in 2009. Refining her act somewhat, Kate found looking after dinner guests almost as rewarding as gig goers (despite their rather greater sense of entitlement) and embraced the world of fine wines, award ceremonies and locally roasted coffee beans with gusto – also discovering that co-owning and running a restaurant is the best weight loss plan ever. After five years, it became necessary to look for a larger premises for Aumbry and controversially Kate decided that the site of the club would be perfect. The Roadhouse closed in 2015. She was wrong.

Despite best efforts this plan fell through leaving her for the first time in 17 years without a night club or restaurant to play in.

She can currently be found at Manchester Art Gallery Café assisting the General Manager, dreaming of the days when she has her own gaff again.


Considering her dues to the music industry paid up, she closed the venue in May 2015 with view to transforming it into The Green Lampshade, a fine dining supper club - which alas wasn’t meant to be.
Continuing to work with Mary-Ellen on various marvellous pop-ups and MIF 2015/2017 whilst joining the hospitality management team at The Lowry Theatre Kate can’t wait to join forces full time again and provide Manchester with the late night saloon that it deserves.
Artefact added : 23rd February 2018
by mdma_volunteers