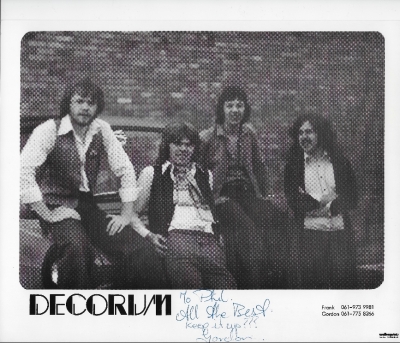 DECORUM : A 1970s rock band from Partington, Trafford, Manchester.
Promotion Photo : Includes a friends message to Phil from Gordon Healer.
Best Concert : Grappenhall Rock Party, Grappenhall, Warrington in May 1973.
Decorum grew out of the bedlem of local Broadoak Comprehensive School.
Doing their own songs, covering Free, and other 70s Rock & Progressive bands.
The band got their name 'Decorum' from Broadoak teacher Mr Jones, shouting that he wanted 'decorum' in the classroom. It is not known how they got this gig.. But once played at the London Palladium backing Gene Pitney and Bonny Tyler.
Artefact added : 1st March 2018
by curbsfan