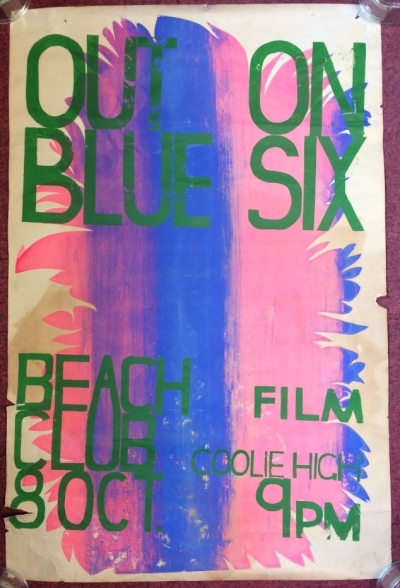 A poster I was offered for a gig at The Beach Club at Oozits. I'd not heard anything by Out On Blue Six before, so had a listen online and loved what I heard. Also found some interesting stuff about them.

(From peel.wikia.com/wiki): "Out On Blue Six was a 1980s band from Manchester who recorded two Peel sessions and released one single, with three tracks on two compilation LPs. Band consisted of Geoff Woolley, Mike Daly, Nigel Holland, Kate Sekules, who went on to write 'A Boxers Heart' and become a successful journalist, and Carl Marsh who went on to form Shriekback with Barry Andrews of XTC.
...It appears that the name of the band was more influential than the music they played. A sci-fi novelist called Ian MacDonald confirmed in a tweet that the name inspired the title for a novel in 1989 following an enquiry from Wiki Member MarkL. Whilst following an enquiry by Wiki Member RobF, Mark Radcliffe confirmed that it inspired his naming of a radio show he hosted on Radio 1 from 1991 to 1993 as "Blue Six was an imaginary planet where music was superior. Mark was marooned 'out there'. Name poss inspired by minor Manc band". Obviously if Mark Radcliffe was the producer of the Out on Blue Six sessions there would be the direct link to Peel but unfortunately it's not as neat as that as the MR responsible for producing their first session was Mike Robinson and Mark Radcliffe did not start producing Peel sessions until 1983. There is also a blog site about all things 80s with the same moniker."

(From left-and-to-the-b...): "Besides this single [Party Mood], Out On Blue Six recorded two sessions for John Peel (one in 1980, the other in 1981) and apparently little else. You would have hoped that a more organised indie label could have found space for them on its roster, but it would seem that nobody bit, and this is their sole physical product.

Kate Sekules eventually became a writer and a professional boxer, a role perhaps well suited to someone who had to deal with petulant Hawkwind fans. Her book "The Boxer's Heart" chronicles her life and career. She was also once travel editor of "Food and Wine" magazine, but presently runs a vintage clothing business in New York."
Artefact added : 8th March 2018
by OT