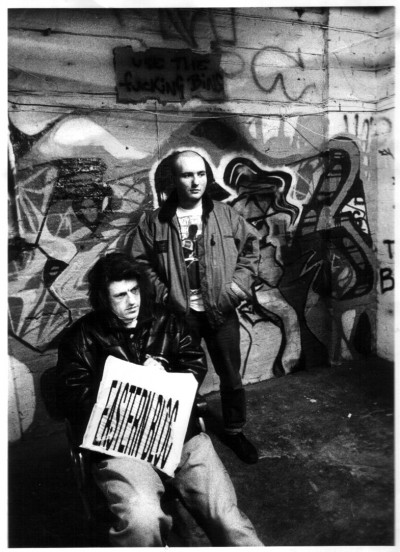 monty Says –
Guy Oldhams! whatever happenen to him?

mat Says –
record shops are great places for djs and musicians to work, of course. i spent 10 years at Vinyl Exchange and we had Djs Adrian and Mark Luvdup, Dj Balearic Mike, Dj Kath McDermott, Dj Russ (ex-Manchester Underground Records also), Dj James 'Boggy' Holroyd (Bugged Out), Dj Dave Booth, Dj Julian Bester (Smile), a guy called Shane who I think Dj'd, DJ Miles who is one of the Baked Goods crew and one half of electronia act Pendle Coven, as well as Alun Jones who was in the band Screen Prints and who has set up Broken Horse records in Chorlton and Zoe who formed a great band called Hooker (which now includes a couple of other VE members i believe)... Richard Farnell (The Suncharms and Screen Prints), musician and MDMArchiver Abigail Ward... and i've probably missed out some!

mat Says –
oh yeah- Steve Yates who now writes for Word magazine amongst others... (he recently wrote about his 10yrs at the VE in Word magazine).

Mike Noon Says –
Mike Kerwin can now be seen following FC United of Manchester around with a video camera, filming the club and its fans for the weekly Channel M show FC United: The People's Club.

pi1 Says –
My name is paul ireland and it was me that came up with the whole idea this record shop.
The shop started life on the 5th of october 1985 in affleks palace on the third floor as earwig records Ltd.
One year later when i heard that affleks was due to expand onto the street front of oldham street i jumped at the chance to sign us up trading as eastern bloc records, it was a real hard struggle to get to that point with 7 day weeks the norm but soon after we got into the new premises on oldham street we got into financial trouble, i started to sell, [hash/weed] to help us get back on track.

When i came out of prison at the end of '87 i found myself being verbally attacked by martin and john who had previously been putting notes through my door asking for 8th's etc, it was these notes that sent me down in the first place, [cheers john, i expected a bit of loyalty for that one].
The short story is i got froze out by all three of them, martin price, john berry and mick powers.

I don't want to hear how martin or john did this or that because without me they wouldn't have come up with anything, i just want the record put straight, e bloc was built on deception and thievery, if you listen to martin or john they will tell you lies, the only reason i got john involved in the first place was because he was doing a business course at college, funny that he forgot to add the vat in our first year.
As for mick kerwin, well i thought he was a decent sort more interested in what was right.... he jumped into my shoes pretty fast though.....

This is how the shop started, it's brief i know but i found it doesn't pay to dwell on the negative and retribution is not my style, lucky for them.