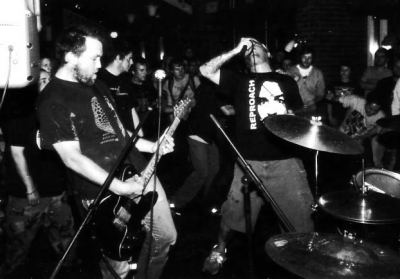 ASSHOLE PARADE (Gainesville, Florida) playing a gig put on by Yeah! Manchester. There were not too many gigs held in this large pub during this time, and when a few people started slam-dancing the bar staff thought that a fight had broken out. AP returned 2 years later, playing Cafe Saki in Rusholme.

The full line-up was Asshole Parade, Army of Flying Robots, The Day Man Lost, Run Like Hell, Anxiety Attack. All incredibly fast and loud.
Artefact added : 15th May 2018
by storminateacup