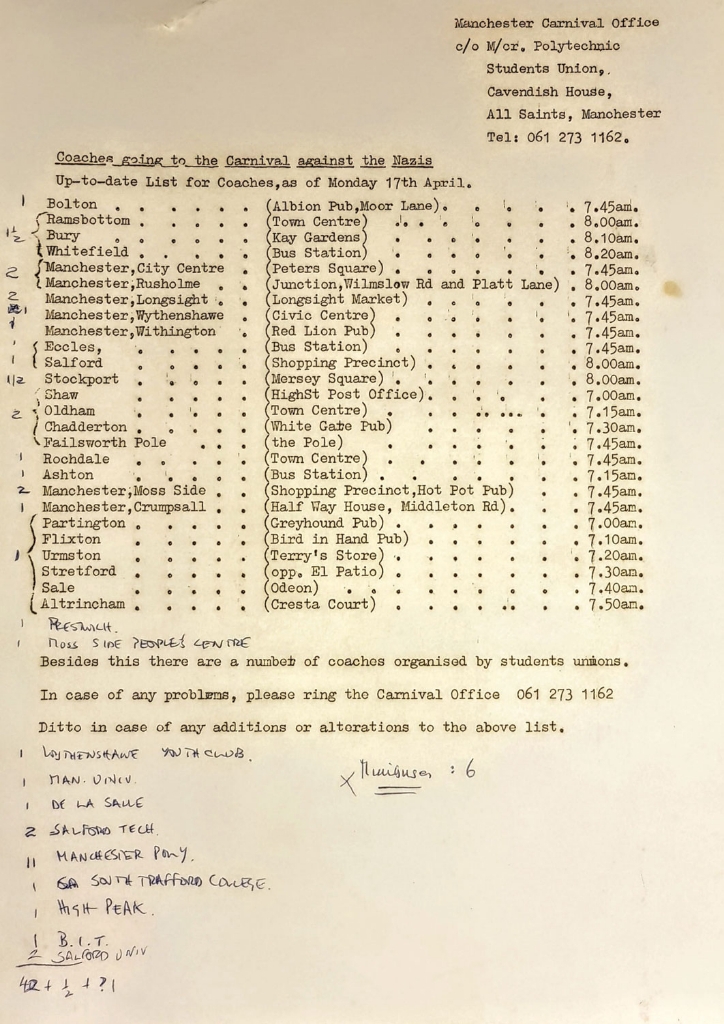 In April 1978, the first ever Rock Against Racism/Anti Nazi League Carnival was staged in Victoria Park, London. The final line-up included The Clash, Steel Pulse, Tom Robinson Band and X-Ray Spex. 80,000 people attended, with 2,500 travelling from Greater Manchester in 50 coaches and minibuses. Geoff Brown (Anti Nazi League) co-ordinated the coaches with help from organisations such as Manchester Polytechnic Students’ Union. This Geoff's list of where all the coaches would be picking up.

It was on the train home from the Carnival in London that Geoff Brown and Bernie Wilcox, who had already been promoting small RAR gigs across Manchester, decided that together they would organise the Northern Carnival Against the Nazis.

Ten weeks of intense work followed with many volunteers and sympathetic organisations lending a hand. Hundreds of people made special banners, placards and badges, and helped to book coaches from outside Manchester.

Thanks also to all our wonderful volunteers.
Artefact added : 8th November 2018
by Abigail

louie_shelley Says –
Hi, would it be possible to use this image in my book about Buzzcocks, 'Ever Fallen In Love'?
If you'd like to leave a comment, please Login. Login
Manchester Digital Music Archive is licensed under an
Attribution-NonCommercial-ShareAlike 4.0 International License.
Charity no. 1164179
Our archive currently contains 3870 Bands, 758 DJs, 1461 Venues, 323 Industry Professionals and 29722 artefacts contributed by 4048 members.