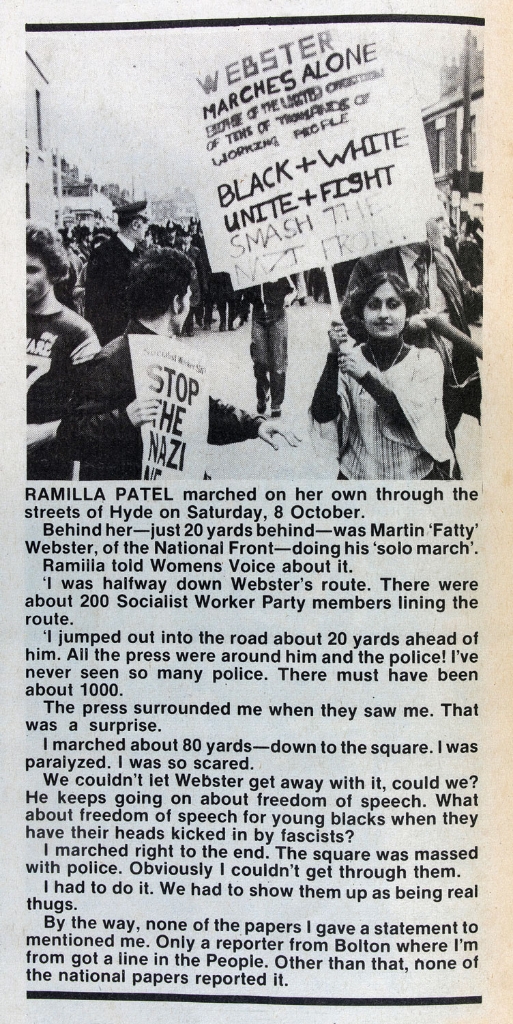 In October 1977, National Front leader Martin Webster staged a one-man march in Hyde, protected by an estimated 2,000 police officers. A counter-protest was carried out by 20-year-old Ramila Patel of Bolton Asian Youth Movement, who walked in front of Webster carrying a placard that read (on the rear): ‘This man is a Nazi’. Ramila managed to walk about 80 yards before a policeman grabbed her placard and broke it in half.

Following her brave stance against National Front leader Martin Webster, Ramila Patel, aged just 21, addressed the rally at Strangeways that preceded the Northern Carnival against the Nazis at Alexandra Park in 1978.

Recalling her address to the carnival crowd of 15,000 at Strangeways, she says: “It was very moving to see the massive crowd in front of me who were there to oppose the National Front. We were united by our love of music and hatred for racism. At the end of the rally we danced to the music blasting from the trucks in front of us all the way to Alexandra Park. Waving our Anti Nazi League lollipops, the journey from Strangeways to the Carnival was memorable. I will never forget the thunderous welcome from the huge crowd that had gathered in Alexandra Park. It was an emotional moment and I felt an acute sense of solidarity with the crowd.”

Bringing music and politics together in such urgent need, embracing the aesthetics and spirit of the punk movement and fostering support across generations, the Northern Carnival Against The Nazis is widely seen, by organisers, attendees and historians, as having had a long-lasting influence on attitudes towards diversity and race in the city and beyond.

Thanks also to all our wonderful volunteers.
Artefact added : 8th November 2018
by Abigail