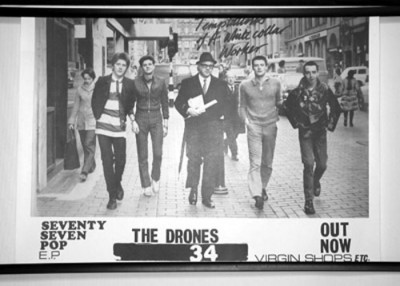 A poster for their 'Temtations of a White Collar Worker' ep. The single sold 10,000 copies. The photograph was taken by Kevin Cummins, who says...

"It's the same as the sleeve - shot on King Street. We picked a likely looking businessman and they'd walk up behind him and I fired off a few shots. We probably did it three or four times until we got the shot we wanted."
Artefact added : 5th June 2007
by mat

deadhead Says –
does anyone remember the surname of the 2 brothers mike and pete from the drones?

mitch Says –
Aye; it was Howells

davebentley Says –
We actually shifted 14000 copies - remarkable as there was no organised distribution Dave Bentley
If you'd like to leave a comment, please Login. Login
Manchester Digital Music Archive is licensed under an
Attribution-NonCommercial-ShareAlike 4.0 International License.
Charity no. 1164179
Our archive currently contains 3605 Bands, 692 DJs, 1317 Venues, 206 Industry Professionals and 19401 artefacts contributed by 3517 members.