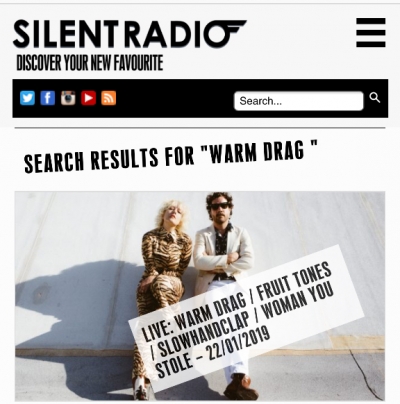 Curiously we start with the strongest (my opinion, don’t axe me) of the support acts, a local 3 piece that is dominated by overpowering (Ship of the Line about to commence firing vibe) drums and a robust lead vocal (a soaring, Siouxsie Sioux-esque quality) that binds tastefully with a (at times) more eccentric backing vocal (Easter Island chanting?). In the backseat of this oddly painted automobile comes what I suspect to be the sound of Alan Rickman’s voice manifesting itself into bass guitar format, in tandem with guitar playing that varies from chimed notes, punk-like shredding and even delay effects that certainly put the lo in lo-fi.

Further content from their consistently entertaining set list includes instructions on how to dance (Shake), wrong-footing the audience into a false applause (Sweet Cherry Wine) and even a segment of French spoken word (Pardon My French). With this insurmountable evidence, it all but debunks the myth that the opening act by default is of a lesser quality, quite the contrary in this case. Oh, food for thought, these guys will be playing at the Deco Promotions ‘All Dayer’ (situated at the Peer Hat on the 9th February), alongside a number of other worthwhile musical entities; indulge yourself.