The Manchester Mekon, The Passage, The Beach Surgeon
Other
Cyprus Tavern
1979 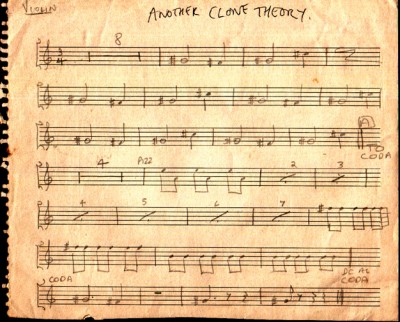 Some sheet music for a gig concert given by the Manchester
musicians collective orchestra..
Musicians from various bands organised by Dick Witts of the Passage... Frank of the Manchester Mekon provided the rehersal space at his shared house on Burton Rd Didsbury, members of
the Lurkers, Sharn from Stockholm Monsters, Corky are some people i can remember being involved. I played violin , Dick witts on Cello..it was a bit Portsmouth Symphonia.
Not sure who wrote this piece ..Dick or Frank.