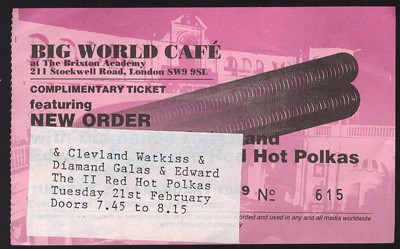 Ticket for New Order's recording for the British TV program 'Big World Café' on Tuesday 21st of February 1989 at the Brixton Academy in London. New Order played three songs, 'Round and Round', 'Run' and 'Vanishing Point'. Other performers recorded that night were Cleveland Watkiss, Diamanda Galas and Edward II and the Red Hot Polkas.

oldmonkey Says –
They also played Dream Attack, which if memory serves me correctly wasn't broadcast at the time.

jsz Says –
it was on later in the week during the repeat, completely missed it at the time but later got a copy (with dodgy sound).
If you'd like to leave a comment, please Login. Login
Manchester Digital Music Archive is licensed under an
Attribution-NonCommercial-ShareAlike 4.0 International License.
Charity no. 1164179
Our archive currently contains 3714 Bands, 737 DJs, 1367 Venues, 252 Industry Professionals and 26418 artefacts contributed by 3770 members.