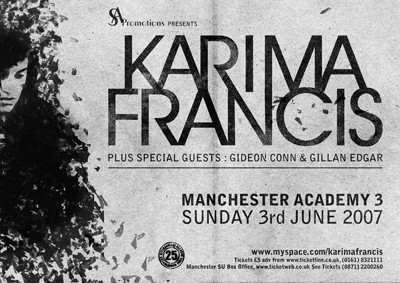 Since relocating to Manchester from Blackpool in late 2005, 19 year old Karima Francis has risen to become one of the most talked about artists in the North West. Listening to her perform either alone or with her band bears witness to an honesty, intensity and power evoked via the simplest of orchestration. Most distinctive of Karima is her voice, the kind that cuts through a room to hush a chattering crown in seconds. Her soulfully expressive, unique vocal style is utterly bewitching, her unexpected vocal flights hardly prepare you for the intimacy and empathy to follow, couple this with a clutch of sensational songs and you would find it almost impossible to believe that she has only in fact been playing and writing seriously for a little over 12 months. A recent BBC journalist said, ‘Her voice is so amazing, even if she sang the phone book, we’d be excited. The fact that she’s got several tunes that match her larynx for ability just makes her better ‘ Karima Francis was one of the success story’s at this year’s In The City playing to a packed out Industry crowd many of whom were left listening to the show from the pavement outside. <P>
This will be Karima's first show in Manchester since signing to Kitchenware.SonyBMG and probably her last before going in to the studio to record her debut album with Ken Nelson (Coldplay, Ray Lamontagne, Gomez and strangely ... The Ruthless rap Assasins???).