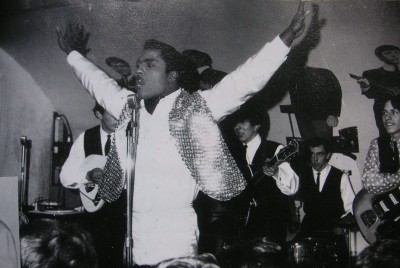 The Dakotas, house band at Manchester's legendary Oasis coffee bar (Lloyd St) backing Little Richard in 1964. "Manchester's most fab club for young people" opened in 1961 and hosted gigs by all the great names - many of whom were backed by the Dakotas.

Arnie Says –
Tony........Am I right in thinking that this is'nt the Dakotas that were in the charts but a band with the same name ?.Was there a member of the band called Pete Taylor ?.The bloke in the spotted shirt on the right bears a striking resemblance to some one I know who is rumored to have played with a band called the Dakotas in the 60's and everybody assumes it was the one with Billy J Kramer.

Tony/Longfella Says –
Hi Arnie This IS the band that recorded with BJK. No mention of your man in my newly-purchased 1958-65 Beat scene book posted on here against this venue or on the website at www.hoscar.demon..... Another local Dakotas - a Comedy Western outfit - changed their name as these guys emerged.

Arnie Says –
Cheers Tony.....I'm off down Ashton for a few bevvies next week so if I see the bloke that I'm on about I'll ask him !!.

moonoid Says –
I was a member of the Dakotas from 1989 until 2007, working with legendary guitarist, Mike Maxfield of "The Cruel Sea" fame. There is a good in depth history of the band here:
www.hoscar.demon....

macdee Says –
I joined the Daks as kbd player same time as Eddie Money & stayed for about 5 years. Lots of tales to tell. Pete Mac.
macd@petethefeet.fsnet.co.uk

Abigail Says –
Hi Tony - I got this email recently: Hi,
a friend has directed me to your website, and a page from Mojo 163 June 2007 regarding DAKOTAS PRESS ARTICLE OASIS 1964.
The photo shows Little Richard at the OASIS CLUB, ostensibly being backed by The Dakotas. Unfortunately, this is the wrong information. The band behind Richard is The Bo Weevils (Jim Hollingsworth, Trevor Jones, Alan Forbes, and Terry Betts) and was taken on 3rd May 1964. The reason I know this is because I am the guy in the polka dot shirt. For photographic evidence see the Manchester Beat website, A-Z of groups, Bo Weevils.
If you'd like to leave a comment, please Login. Login
Manchester Digital Music Archive is licensed under an
Attribution-NonCommercial-ShareAlike 4.0 International License.
Charity no. 1164179
Our archive currently contains 3873 Bands, 759 DJs, 1464 Venues, 323 Industry Professionals and 29805 artefacts contributed by 4067 members.